You Got Some Candy In There?*: Finding What You’ve Stored Away 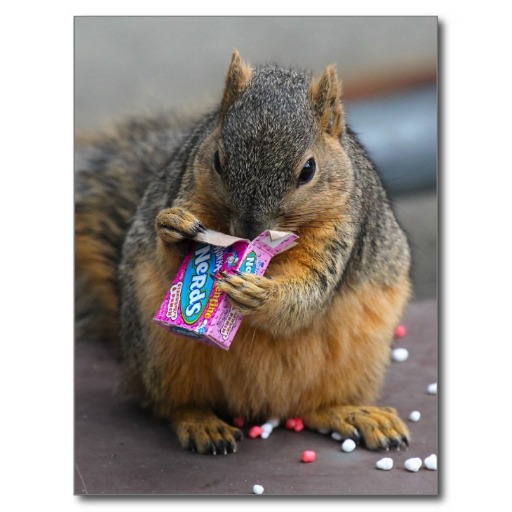 You can buy this cutie postcard on the NationalWildlife page on Zazzle.

This is a repost of something I wrote several years ago. I’ve had some of this on my mind lately, so it seemed like a good time to repost it. I don’t get this as much with hips now, but now and then…

So, when I heard my yoga teachers connecting the two, I wasn’t particularly resistant. “If you believe you cannot do a pose, you will not be able to.” Ok, yep, gotcha. “Think of yourself in the pose and you can more easily get there.” Okie dokie. “Stop letting your mind get in your way.” RIGHT!

But, when the various instructors I have had mentioned that some yoga poses, by creating an opening in an area of the body where emotions have been stored, can release a wave of emotional reaction, I just wasn’t getting it. It wasn’t so much that I disagreed; I just didn’t feel it, so it wasn’t really making sense to me. The only emotions I felt in yoga were happiness related to being there and doing the poses or frustration that I couldn’t. That was pretty much it.

Then I started yin yoga. The first class of yin that I went to, I pretty much spent the entire hour in a state of annoyance, so I wasn’t really considering how individual poses made me feel. Over the next few sessions, as I found my way into more physical release in the poses, I was able to appreciate the differences in my state of mind.

After a few sessions, I began to notice that some poses made me feel a sense of panic. At first it seemed that this was because they involved folding over, and I thought maybe I just wasn’t getting quite as much air – thus the panic feeling. But, as the repertoire of poses increased along with my awareness of them, it became clear that it wasn’t the amount of folding, it was the extent and type of hip opening that was occurring.

Poses that really open my hips in a way that causes a stretch along the IT band area just make me feel panicked. There is no logical reason for it. I don’t fear that I’m actually going to hurt myself in Shoelace pose. But, as soon as I move into it, I start to feel like I’m out of control. There have been classes where I really was not sure that I could prevent myself from springing out of the pose and leaving the room due to the sense of panic and loss of control that arises. What the heck?

Here is my armchair yogi interpretation of this. I’m a person who likes to be orderly. I don’t need everything to have a perfect logic fit (i.e. I’m ok with knowing that I love physics puzzles and also abstract painting, even though that may seem oppositional). But, I like to have control of what is going on around me.

I’m getting better at dealing with uncertainty, and I would say that I have made some big strides in this over the last few years. My friend Erica, who has seen me go from someone who could not stand camping because my kids might get dirty to someone who barely insists they bathe during several days of camping, would probably agree. But, there are a lot of years in my past of trying to tightly control myself and my life.

Apparently, every time I felt a sense of panic or lack of control, I just “stuffed” it all into my hips. Yep, they are packed full of panic – weird, huh? So, now when I stretch and open them in that way, it seeps out and causes me to feel a little like I’m being deprived of all oxygen.

I would guess that not everyone is stuffing their lack of control into their hips. Perhaps you have been putting your sadness in your abdominal muscles (yeah, unpack that idea!). Maybe you have been putting your anger in your shoulders. Maybe your hips have something else in them – fear or even joy. The next time you feel an emotion arising unexpectedly that seems to be unconnected to what is going on at that moment, take some time to observe whats going on with your body. What are you releasing? Have you got some candy in there?

This post title refers to a joke between some of my “mom friends” and I. Back when our children were toddlers, and in the phase where they just wouldn’t stop following mommy around for 2 minutes, we used to laugh about the things they would yell through the bathroom door when we were inside . One of those included, “hey! You got some candy in there?”