On Vegan Parenting – So Many Options

Parenting is a challenge.  If anyone has ever told you that it isn’t, then he/she was either delusional or a liar.  There are so many decisions to be made, and few of them are simple.   It starts even before birth, when choices about prenatal testing, natural childbirth, labor anesthesia, circumcision, and breastfeeding are just a few of the issues faced by parents.  Once the child is born, the list continues to grow (cloth or disposable, co-sleep or not, stroller or babywrap,  immunize or don’t) and becomes even more complex.

As food is a rather vital part of living (if you want to continue doing that), choices eventually must be made about what/how to feed little junior.  For the vegan parent, this means electing whether to raise the child as vegan, vegetarian, or omnivore. 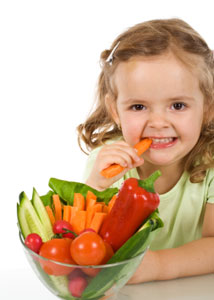 This choice is more complicated than it may seem on the surface.  Pediatricians and family members will want to weigh in on the decision.  If the parents have a similar diet, they might more easily select to raise baby in that same way.  But, if they have dietary differences (vegetarian and vegan, vegan and omnivore, etc.), there might need to be some negotiation.  Presence of older children in the home, and what sort of diet they  have, is also an issue.  And then childcare must be considered.  If the baby will be regularly cared for by a relative, friend, or paid carer with a very different diet, that might be an issue.

In the VeganAsana household, 4 of the six children arrived pre-vegetarianism.  2 arrived post-vegetarian, but pre-vegan.  Mr. VA is an omnivore.  So, all of our children have been presented with an omnivore diet, with a heavy emphasis on vegetarian and vegan options and meals.  In a week of dinners, I cook more than half vegetarian/vegan and the remainder omni.

This option, along with ongoing education about nutrition, the farm industry, and the origins of food items, has allowed our children to make their own decisions about diet.  At this point, two are vegans, one is a vegetarian, and three are omnivores.  It has worked fine for us.  I can’t say that I would be sad if I never had to prepare another non-vegan food dish, but until the time when everyone in the house is old enough to cook for him/herself, I will keep doing it.  I also wouldn’t say that it’s the “best” way to handle things, but in a mixed diet marriage, it is a reasonable option.