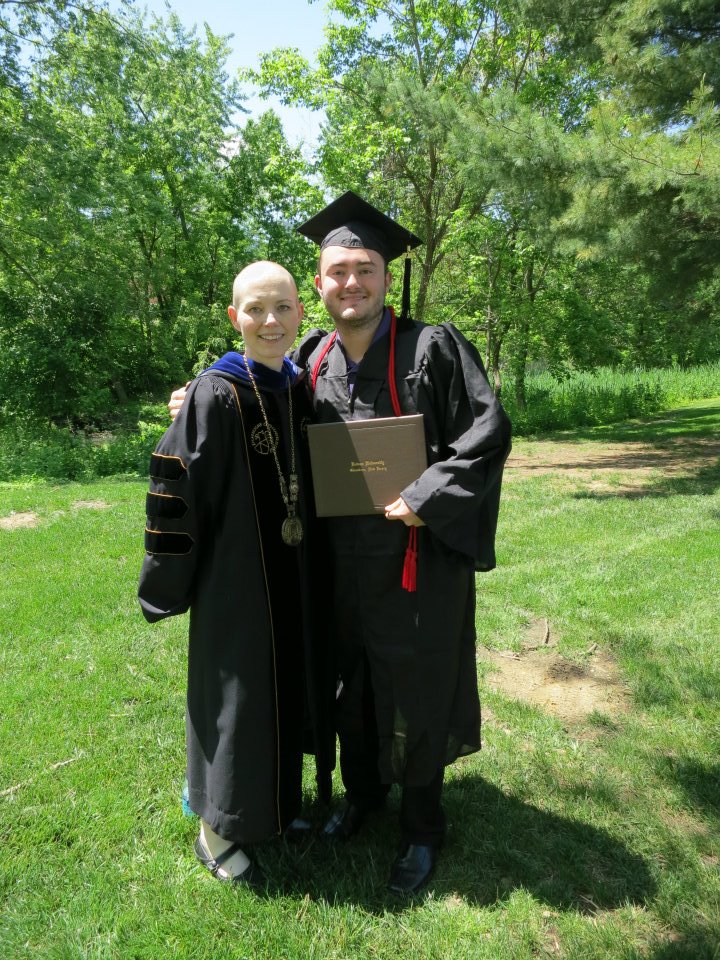 “You can kiss your family and friends good-bye and put miles between you, but at the same time you carry them with you in your heart, your mind, your stomach, because you do not just live in a world but a world lives in you.” ~ Frederick Buechner.

Do you know how far it is from Collingswood, NJ to Los Angeles, CA?  I do. It’s 2,720 miles. I know that because my second son, Devin, left last Friday to go live in L.A.

Devin recently graduated from Rowan University and is now pursuing his future in the TV and film industry. He is not the first of my children to move out of the house. His older brother, Jacob, moved out a few years ago. The difference is that Jacob moved to Camden, and then to Philadelphia. Even though he was gone, he was just minutes from home.

Devin headed off to LA, far enough that visits will be pretty rare and he won’t be able to come home for most holidays or a weekend visit. I can’t really imagine what it will be like to not see him around his birthday, or have him home for Thanksgiving, or maybe even miss him at Christmas. But, I know that’s the reality of having a child grow up and make his own life.

It’s not just the visits and not being able to see and talk to him that are different. There will be plenty of phone calls (though, as my niece, Molly, who loves her cousin dearly, said, “You can’t hug a phone call.”), and I’ve already told him that he’ll have to put up with me contacting him via FaceTime so that I can actually see him. It’s also that I’m finding it more difficult because, somehow, it feels like if he was closer, I could help him more in times of need. I’m worried that something will happen and I won’t be there to help him. Mostly, I understand, this is my personal need to control situations and my own fears about not being able to do that. Honestly, there aren’t that many situations where he would need help that I could really provide, whether he was here or there. And yet….

And all of this brings us back to that issue of letting go, which I’ve talked about here before a number of times (here, and here, and here), as well as on elephant journal. It is a part of parenting at all ages, but becomes heightened as children move into being adults.

The entire experience of being a mother (or a father) is about learning to let your children move away from you. I know that, intellectually. And, mostly, I’ve been able to embrace it emotionally. I’ve never been the mother that got upset when the kids started school. I happily handed them over to their kindergarten teachers with a smile and a lunchbox. And that’s not just because there are six of them. I wasn’t upset when the first one started school, and then there were only two. Those transitions didn’t seem like the end of something to me; they just seemed like moving into a new phase of their/my lives.

I wasn’t upset when they graduated elementary school, or middle school, or even high school. I was proud of them for each accomplishment, but I didn’t feel sad to see them growing up. There was no crying. But, this feels different.

I really didn’t want him to go, but at the same time, I did. I know that this is an amazing opportunity for him, and he’ll be ok. He has a good head and, while he’s a young man that will take some risks that perhaps I wouldn’t love, he makes wise choices most of the time. He is also very dedicated once he sets his mind to something, so I’m sure he’ll succeed in whatever he does there. But, there is a mom part of me that is feeling a little empty and sore and tender right now. There is crying.

Life is change. Parenting is change. Sometimes, it’s not easy to make even the good changes.