As I mentioned yesterday, I’m working on santosa this week.  Santosa, or contentment, might not seem at all related to veganism, but I think it is.  The ability to be content with what you have, rather than yearning for what you do not have, is what makes a vegan diet not only possible but pleasing.  Unfortunately, some of the tools that we have to help us be vegan can actually get in the way of this contentment.

Vegan versions of meat items are a prime example.  I love my homemade seitan loaf (aka “tofurkey”).  I really do.  A sandwich with it is a marvelous thing.  But part of what makes me 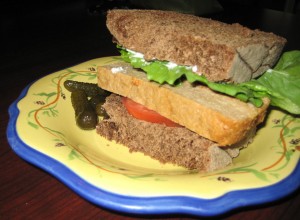 so happy with it is that I don’t expect it to taste like turkey.  I’m not yearning for the taste and texture of turkey when I take a bite.  I like tofurkey on its own.  If I really wanted turkey, I would be disappointed with the tofurkey.  This is true for most veganized versions of animal products, even basic things like soy milk.  I really like the taste of soy milk now.  I am pretty sure that I would select it over milk even if I weren’t vegan.  But, at first this was not the case.  At first, I wanted it to BE milk, and I came away from every experience unhappy that it wasn’t.  I started with the vanilla and chocolate versions, because everyone told me that they would taste like sweet flavored milk.  They did  not.  Eventually, to reduce the sugar in my diet, I started buying unsweetened unflavored soy milk, thinking that I couldn’t like it less.  I found that I actually liked it more, because I had no expectation of what it should be and could just taste what it was.

As I said yesterday, using prepared replacement foods is a good way to go at first, because it makes the process seem more approachable.  But, as one moves forward in veganism over time, cultivating contentment in this way of eating means developing happiness with what is available, instead of trying to recreate always what is not.  Even when “faux” _____ items are selected, there is a difference between choosing them because we like the taste of that product and choosing them because we are really yearning for the animal derived item.

Are there things that you use in your vegan eating that get in the way of your contentment as a vegan?

3 Responses to Being Content with Vegan Food – Vegan MoFo 27