I work with a few (lovely) people who are convinced that, as a vegan, all I eat is twigs and bark. Today, on Top Ten Tuesday (or List It Tuesday), I am sharing a few of the “treats” that I regularly enjoy. While some of them are fairly nutritious, others are very much not.

In no particular order:

1. Soy latte – Yes, indeed. I can drink a soy latte, with no additional flavoring or sweetener, at just about any time and really love it. Pretty much the only time that I won’t have one is if my stomach is actively ill. Otherwise, bring them on! I really do like Starbucks (sorry, SB haters), but that isn’t required. After 3 p.m., I’ll generally go with decaf, but that’s my only concession.

2. Soy crisps – A while ago, I tried to decrease my pretzel reliance, and I missed the crunchy salty goodness. So, in came the soy crisp. They come in many flavors, but I like the plain sea salt best.

3. Pistachios – Pistachios are a good snack for me, because they take some concentration and mindfulness to eat, and the activity makes me feel like I’m having a nice big snack, even if I only have a few. Also, nutritious!

4. Frozen banana “milkshakes” – When the desire for ice cream hits, there are always frozen bananas in my house, and I can whip up one of these quickly. As a side benefit, they are also pretty good for you.

5. Tofu not-jerky – I actually don’t have this as often as I want to, because it doesn’t last long in my house and then it’s all gone *sadface.*

6. Apples with cinnamon – Sometimes, I can go for a long period without eating an apple, and then when I do, I wonder what I was thinking! I love apples, and a little cinnamon sprinkled on top is just the ticket.

8. Daiya provolone and wheat crackers – Just yum. I don’t know that I think it tastes like provolone, but then I have not had that for almost a decade. I like it, whatever it tastes like, and like the idea of having “cheese” and crackers.

10. Carrots and brown mustard – Yeah, it might sound a little bit odd, and I recognize that this is basically a veggie (contributing to the twigs and bark idea), but I do like carrots dipped in brown mustard. I can eat many of them… many.

So, there you have it, ten treats that I enjoy. How about you? 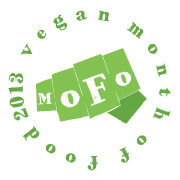