Pick Your Yoga Practice by Meagan McCrary – A Book Review

I was recently contacted by New World Library publishers to do another review of a yoga text for them. Because I have had a good experience in the past with their works, I agreed. What follows is that review. I would have also made this a book giveaway, as I typically do with all promotional books reviewed, but I spilled an entire cup of coffee on the book, so sadly no one wants it now! 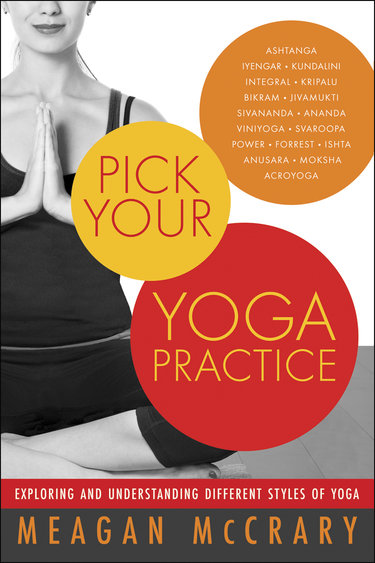 The book is titled Pick Your Yoga Practice and is by Meagan McCrary. While there are chapters about the general principles of yoga and yoga philosophy, the primary focus is on describing a variety of yoga styles, so that the reader can find the one that best fits his/her own needs and preferences.

There are 7 yoga styles, each with its own chapter, discussed in detail in the book. They are Ashtanga, Iyengar, Kundalini, Integral, Kripalu, Bikram, and Jivamukti. An additional chapter considers “the best of the rest” and includes Acroyoga, Anusara, and Forrest, among others.

While there are a few small points here and there that I would alter (regarding the yoga styles about which I am individually most familiar), I believe McCrary does a good job of providing a basic sense of the styles of yoga she covers in this book. Readers are provided with the information necessary to guide their exploration of different types of yoga.

I would not recommend trying to read this text back to back, as I did, because things start to become very confusing, very quickly. Instead, it seems to me that the best way to approach it would be to being with informational/philosophical chapters, and then move to the “Styles at a Glance” chart provided in the front of the book. After selecting a potential style, the reader could then read that chapter carefully, perhaps sample that style with a class or video, and then move on to others that sound appealing. Basically, I would suggest this as more of a reference guide than a book to simply read.

I was interested (troubled?) to note the absence of Yin yoga of any type in the text (even in the “best of the rest” chapter). All of the styles of yoga here are asana focused and are yang based. Those looking for a restorative or yin practice will find little here.  Similarly, non-hatha yoga is considered very little (primarily only in relation to the Integral style). Bhakti yoga gets one paragraph there and a mention in a chart on page 8, as do raja, karma, jnana, and japa. While I understand the choice, I think that it might have been wise to somehow indicate in the title or subtitle that this is a book about hatha yoga, not so much the rest.

Generally, while I have some small issues with the book, I think McCrary has done an excellent job of providing a reference guide for hatha yoga styles that could be very useful for those beginning a hatha practice or looking to branch out into other styles. I don’t hesitate to recommend it.