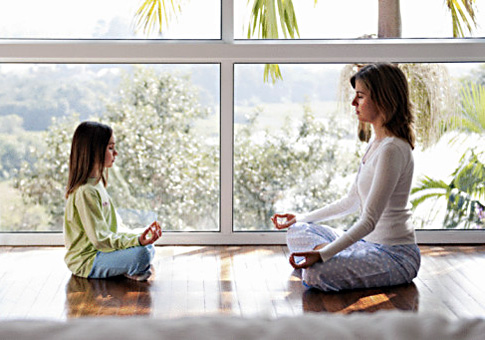 It’s one thing to practice my yoga at home, which I do (though I tend to manage it in more little bursts than long sessions), but it’s another thing to practice teaching at home.  I can talk out loud to myself without feeling like a dork IF no one is in the room, or in one of the rooms nearby.  There are 6+ of us living in the house.  How often is that going to happen?  Rarely.  And just saying it in my head is not the same.

The other problem with using my home practice for teaching skills is that I get into a rut of just saying the same things over and over, because I don’t have anyone to see doing the poses.  I can’t get any feedback on what makes sense or what doesn’t.  It’s not a very “real” teaching experience.

Mandatory Mom Yoga to the rescue!  I announced this new program to my children last night.  Starting next week (after Christmas), every Friday evening, I will be hosting a yoga session in our basement playroom.  I have space for everyone to practice, if they want, but I’m making it required that at least 2 of the kids attend each week.  Mean mean mommy.

I expected to hear some whining, but there really wasn’t any.  The 10 year old looked at me funny with her thumb in her mouth and blankie in  her other hand and nodded.  The 14  year old said that he really *wants* to do yoga with me, so that would be great.  The 12 year old said that he wanted to do yoga so he could “get buff,” at which point the following exchange happened:

Bahahaha.  Those kids… such comedians.

We’ll see how this goes.  It could be great or it could be a total disaster.  I certainly have plenty of mats, several blocks, and a few blankets, so props shouldn’t be an issue.  It’s kind of cold in the basement (which is why I rarely seem to go down there to practice) but maybe that will help us really want to get moving.  And, I figure if I can explain what to do to a bunch of pre-teens and teens, who have rarely done yoga, I should be in pretty good shape for an actual class.