As you know if you read The VeganAsana regularly, I’m currently wrapping up yoga teacher training.  Most of the people I spend my time with are aware that I have been going through this training.  And then there are people who don’t know much else about me other than that I do a lot of yoga (either because we only know each other online or we only know each other through the yoga community).  This means that there are a whole bunch of people who “understand me as a yogi.”  That’s  nice.  It means I can pester people about yoga and they will know why! 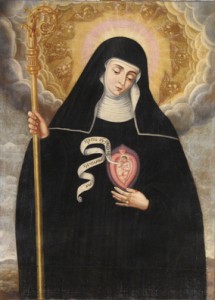 Saint Gertrude the Great - Also quite fond of learning but with a less than perfect temperament that she had to work on.

On the other hand, I notice that there is an assumption that, as someone who studies yoga, I should be above the negative and petty emotions of the world.  I shouldn’t be angry (or at least not without some major righteous reason). I shouldn’t be jealous or envious.  I shouldn’t be impatient.  I shouldn’t experience self-doubt, question my worth, or make statements that imply I’m engaging in self-judgment.  When I do express such emotions now, I get comments related to my yoga practice, or the raised-eyebrow  look, or general impatience.

I’m not going to say that achieving full equanimity isn’t a laudable goal, but I’m so not there.  I don’t actually know any yogis who are fully in that place.  Sure, some are great with not becoming very angry.  But, maybe that same person still has a lot of work to do on being prideful.  Perhaps another has let go of the attachments to the self that cause self-criticism and comparison, but has a hard time being patient with those who haven’t let go of such attachments.  We all have stuff to work on.  Being a yogi doesn’t mean that you have located fully that state of enlightenment that is in there somewhere, it means that you are engaged in actively working on it.  And that’s ok.

5 Responses to I Said I Do Yoga; I Did Not Say I’m a Saint