Family – An Exercise in Acceptance, and Love 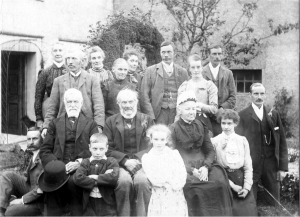 This is not my family 🙂 I didn't want to put up a picture of all the kids without parental permission. But, this looks like a nice family from 1911.

I am heading home tonight from a week spent in Indiana with my family.  In this case, family means 5 of my children (ages 11 – 20) and 15 or so siblings, parents, nieces and nephews.  It was a wonderful week and an interesting one to be sure.  When my Indiana family and I get together, I can’t help but be struck by the variety of people in the group.  We had family members under 3 to (ahem) over 65 talking and playing games.  There were vegans, vegetarians, omnivores, carnivores, and pickyvores.  The group included Catholics, Episcopals, Presbyterians, agnostics, and at least one Buddhist.  There were some with very liberal political views, some very conservative, and some in between.  There was at least one serious pacifist and one gun-toting proponent of the right to bear arms.  There were runners, walkers, yogis, bicyclers, iron pumpers, and sit-on-the-porchers.

You would think that this amount of difference might result in a lot of bickering or anger, but it didn’t.  Sure, there was the usual sibling fussing, spousal differences of opinion, periodic sighs or eye-rolling, and little disagreements here or there, but they were minimal and they passed quickly due to the overall attitude of acceptance in the group.  Even in the areas where the range of beliefs is broadest, people listened (mostly) patiently and showed much respect for each other’s viewpoints.  This was very clear to me so often across the week and it made me smile, inside and out, to see how far acceptance and loving kindness can go toward creating a beautiful environment.

As I (probably the most liberal person in the group), sat with my father (probably the most conservative) talking politics over coffee for several hours across the mornings, I could see this in action.  As a group of 17 people sat around a kitchen table creating gang names for everyone and working up a script for a future sit-com (it’s a long story) and laughing until we hurt, I could see it.  As I watched an almost 21-year-old young man play almost endless games with his 6 year old female cousin, there it was.  When I heard many omnivore members of the family being solicitous and concerned about the care and feeding of the three vegans in attendance, I saw it.

I can’t say we always get along as well as we did this week.  We have the usual family issues.  But, I think it is the general willingness to accept each other for who we are that makes it all work in the end.  I know my family isn’t unusual in this.  Wouldn’t it be amazing if we could take this loving acceptance that we show for those closest to us and spread it more broadly?  What would that world be like?

5 Responses to Family – An Exercise in Acceptance, and Love