During a yin class on recent Sunday night, my instructor used the phrase “be like water” when describing how to surrender to a yin pose.  This was perfect for me, as I have recently read Old Path, White Clouds: Walking in the Footsteps of the Buddha by Thich Nhat Hanh.  The book inspired me to think about the nature of self (and selflessness) and the universal connection.  It also made me consider the notion of resistance.

I have to admit, sometimes I have a hard time getting a good grip on the concepts of Buddhism.  I think I have it, and then it slips away from me.  At several points in the book, the metaphor of the ocean is used as an explanatory mechanism, and that has really helped me to feel more comfortable with some of the ideas.  And, as I heard my instructor say “be like water,” I found my focus for the yin session meditation, and for this post.

In the ocean, there are many waves.  Each wave is “born from” the whole, yet remains a part of the whole. 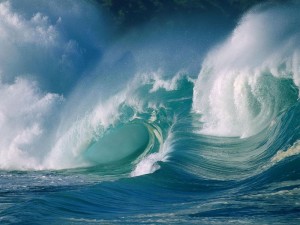 Each wave seems distinct from the others, with its own characteristics, but at the same time has no self that is not part of the totality of the ocean.  As each wave “dies” crashing on the shore, it returns to the pool of the whole and continues on in and endless cycle.  When I utilize this idea to help me think about the connection between all being(s), it becomes clearer to me.  It assists me in feeling my connection to others, which encourages a sense of universal love for all.  This is one way that I understand and utilize the phrase “be like water.”

In another sense, I think of being like water in terms of resistance.  Water does not resist, it flows into the spaces between; it moves into the openings without judgment.  Water also does not refuse what is offered into it.  As Buddha discussed, whether something “lovely” like a lotus flower or something “icky” like garbage is thrown into the water, it accepts without resistance.  I hope to cultivate such an attitude in my life, accepting – rather than resisting – what comes to me with calmness and openness.

I’m working on being more like water.  Care to join me?