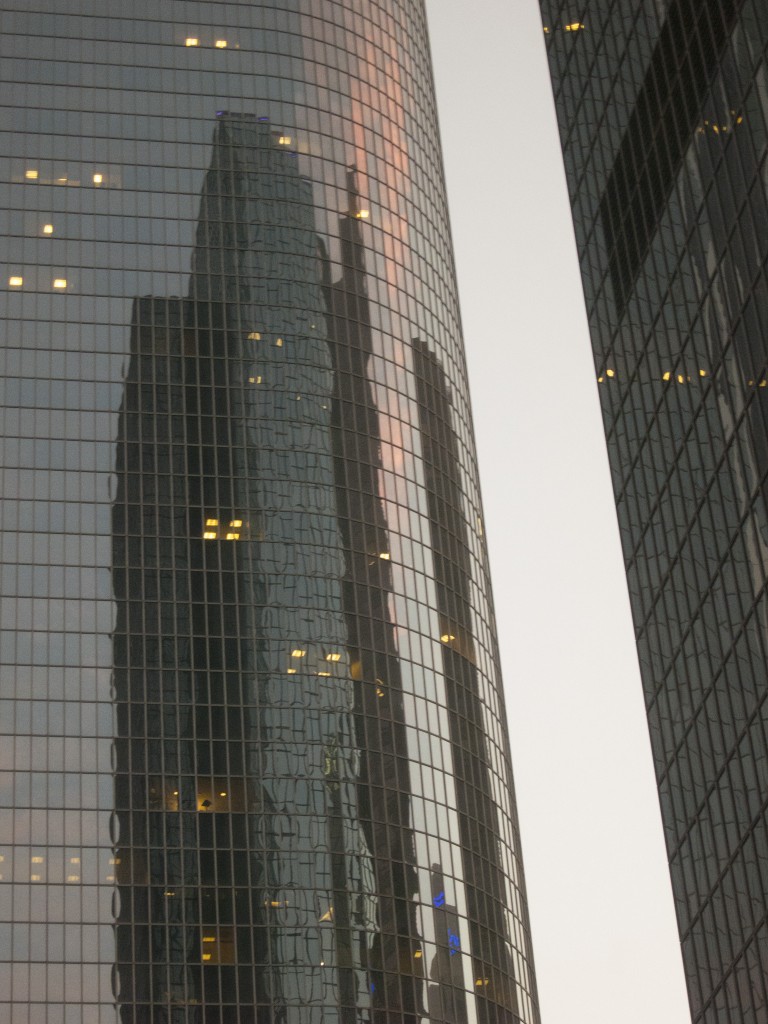 On Thursday afternoon, I arrived in LA, and after checking in, wandering the neighborhood (downtown), and meeting up with dear son #2, we headed out to check out Flore Vegan Cuisine in Silverlake.

Parking around Flore can be a bit of a challenge on the main street, but if you are willing to drive around a bit, there is free parking on side streets all around. The restaurant itself is pretty unassuming. I would call it a “hole in the wall,” and not mean that in a bad way. It is definitely kind of grunge crunchy.

I love a good vegan Rueben, so that was my choice, and my son got a club sandwich. Both arrived with a nice mixed green salad and I think we both pretty much inhaled the sandwiches. Dessert was an amazing peanut butter and chocolate “cheesecake.” It was really only like cheesecake in appearance and was crazy rich. I wouldn’t pick Flore for a fancy date, but I would go back for the good food.

Friday morning, before my first meeting, I headed to Locali, in the Hollywood area. In a little storefront with a real estate agent, a donut shop, and a Thai restaurant (I think) as well as another store or two, this is not a place I would probably notice on my own. It is tiny inside, but boasts a little mini-store as well as a few tables and a nice menu. Apparently they are about to open a slightly bigger location elsewhere, according to the staff working on Friday, who were incredibly nice.

Locali was my pick because I had read about the “Baaadasss Breakfast Sandwich.”  So, I got that. Oh my Ganesh! There is nothing about this sandwich that can possibly be remotely good for you, but talk about delicious. Wow. It’s so good that I live far far away, because I would eat this often if I could. Yum yum yum.

I also picked up a few organic vegan oatmeal bars for in-hotel snack time, and a gluten-free brownie for the road (though it actually didn’t make it out of the parking lot, as I took a walk and then came back and ate it before my meeting).

Friday evening was busy with events, so there was no more food procurement. Saturday morning, son and I decided to drive up the California cost. Before we set off, we stopped in at Native Foods in Santa Monica. Native Foods is not a local place; it’s a small chain. There are stores in Chicago (several) and other areas. You can tell this when you walk in, as the decor and menu are much more professional-chain-looking.

The VeganAsana Jr. (who is not vegan, nor a total vegetarian, but is a good sport) got the Twister Wrap and I got the Chicken Run Ranch burger, as they were recommended as good “first time” items. He also got the lavender lemonade (which was very very tasty). Though the food was perfectly ok, I wouldn’t say it was great. But, it’s a place that I would go again, and I might try the Rueben next time, to see if that is more my style. 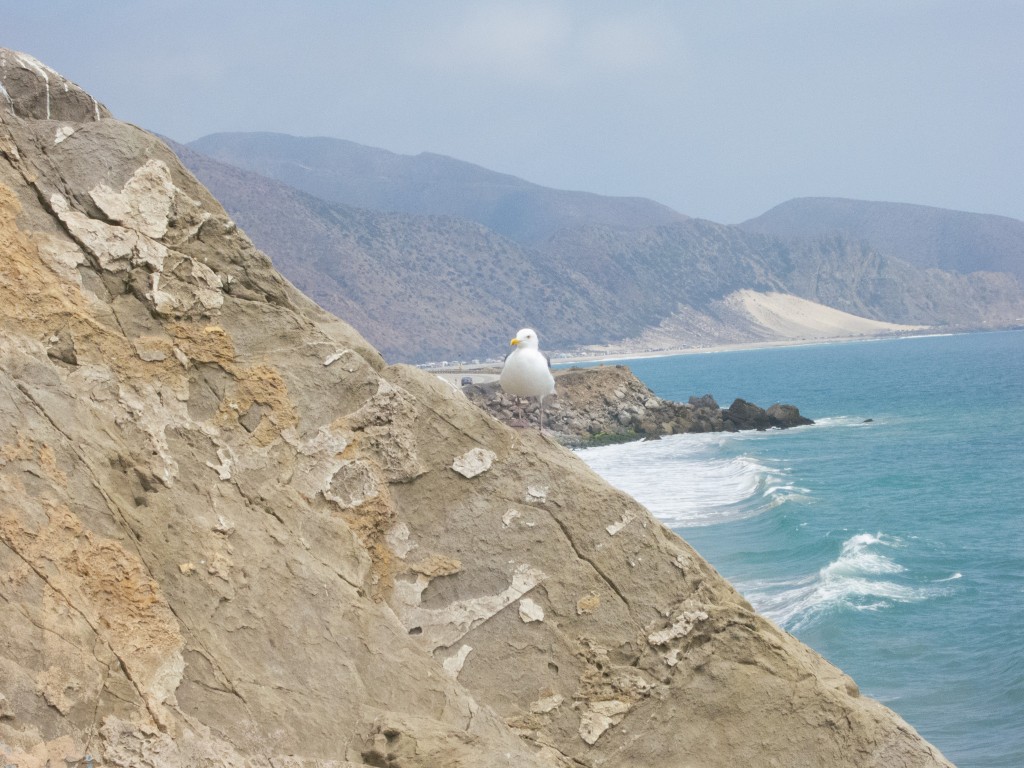 After lunch, we drove up the coast and checked out some beach areas. It was quite chilly, so we didn’t end up even wading or sitting on the beach, but it was a good drive and so pretty.

A drive and a chat later and it was already time for dinner. Traveling is exhausting with all that eating.

D lives around the way from a Thai vegan restaurant (which also has pancakes and burgers – go figure), so we headed there.

Lotus Vegan Restaurant has a LOAD of choices, from curry to pad thai to garlic broccoli to pancakes and beyond. Everything is vegan, and many items come with a choice of tofu, seitan, soy chicken/beef/fish, or mixed veggies). I opted for the pad thai with tofu, feeling pretty full up on seitan like options, and D went for the Panang curry. The entrees were quite good and I don’t know what they did with that steamed brown rice, but it was quite delicious. There were some good sounding dessert options as well, but no room at the inn-the-belly, so we’ll have to leave that review for another time.

Sunday was my last big food fest day, as Monday will be meetings all day and I leave on Tuesday. I had brunch this morning at Sage Organic Bistro with some friends I know from the Philly area (shout out to Patrick and Alison). Sage is quite a pretty little restaurant, with a full vegan ice cream menu, as well as many choices for brunch/lunch.

I had the spinach avocado and walnut sausage florentine. That’s a mouthful, and it was good enough to deserve the schmancy name. I can sometimes end up iffy with spinach cooked, but this dish had just the right amount. The iced chai tea was super well spiced, but note that it does not come at all sweetened, so ask for agave if you like your chai that way.

After lunch and saying goodbyes to Alison and Patrick, I picked up the son again and we went off to the LA Farmer’s Market (which is not a farmer’s market) and The Grove shopping center. There, after wandering around a bit, we remembered that neither of us really like to shop and left in just over an hour.

The next stop was the Museum of Contemporary Art, which we both enjoyed. There is an Urs Fischer exhibition going on right now that is really worth seeing (though we somehow managed to miss some rooms that must have been up or downstairs where we didn’t see stairs). If you are in that area and like contemporary art, I would recommend this museum. It’s not huge, but it’s nice.

After some wandering around aimlessly, it was dinner time, so we set off for our last vegan adventure at Real Food Daily. It’s quite a pretty restaurant (we were at the one in West Hollywood), and conveniently close to a strip bar, a lingerie shop, a tobacco store, and a “massage” parlor, if that works for you.

I got the Mediterranean bowl and it was so good that it was nonsense. D got the Caribbean quesadillas and thought those were good as well (especially the mango salsa). Dessert had to happen, so that was a brownie sundae to share. Yum. We practically rolled out the door holding our bellies.

All in all, this was a good vegan food adventure. I may be full for days, but it’s worth it. And, it was nice to get to share a lot of it with one of my kiddos and get to know him more as a grown-up on his own.

One Response to Vegan-ing Around L.A.