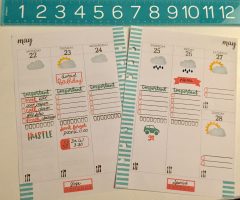 So, dear readers, as you can tell, I have fallen WAY behind. This is a factor of a change in jobs last summer that keeps me even busier (didn’t think it was possible), living away from my family 4+ days a week (so not cooking), and sheer exhaustion.

However, I have been fairly active on Instagram and Twitter, so if you aren’t already following me there, you can (TheVeganAsana on both).

In yoga news, I’m still trying to practice 5-6 days a week, though often for a somewhat shorter time period. I struggled with trying to move my practice to mornings and it wasn’t very successful. RA presents obstacles there. So, it’s evening practice either alone or with an online video. Lately, I’ve been using videos from Fightmaster Yoga, though I’m always happy to hear about your favorites!

In food news, I’m not doing much cooking, but have been mostly eating salads, as that’s an easy meal for just me. But, I will put in a plug for a Philadelphia restaurant that I am loving to visit when I can. If you have not been to The Tasty, and you are a vegan in Philly, you should go!  It’s not the place to drop by if you are looking for a super nutritious meal, but if you want diner style comfort food that is vegan, it rocks. And the coffees are superb.

In life news, I’m using my paper planner (Filofax) as a creative outlet, by combining elements of bullet journaling and planning. Sometimes, I wonder if the pages are a little too cute for using in the office. Other times, I don’t care even a little. 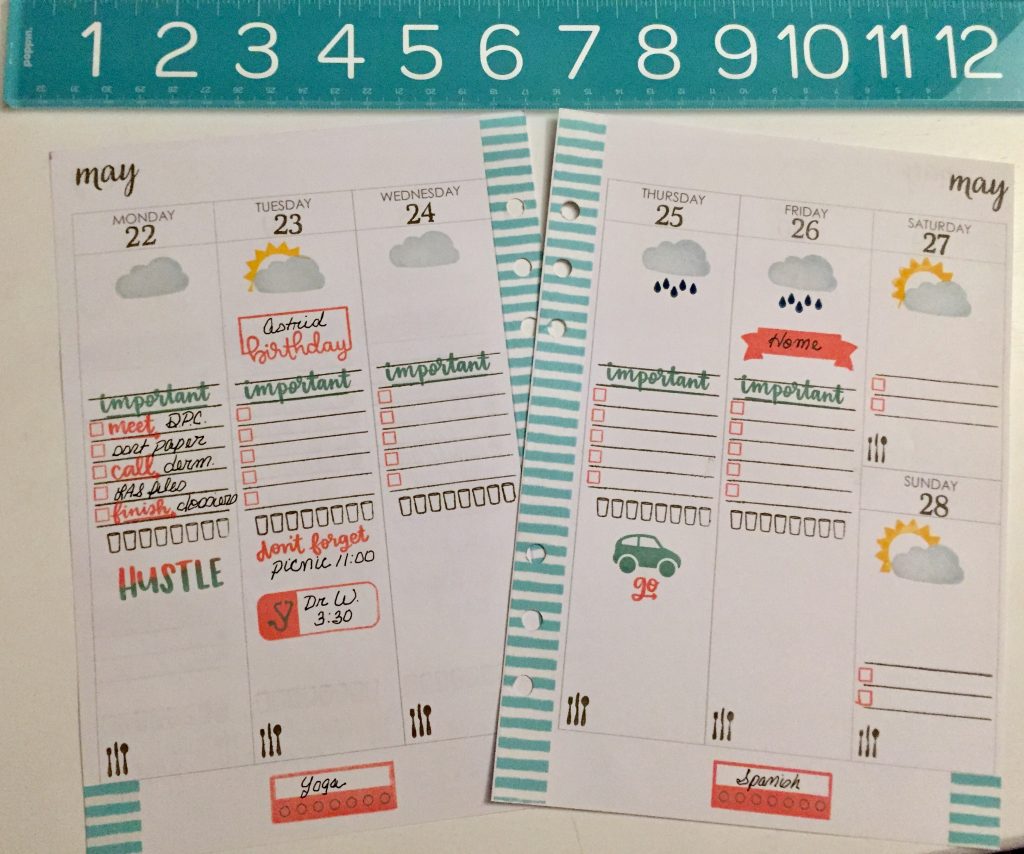 This week, with only part of the Monday stuff added…  If you enjoy planner or bujo layouts, those tend to show up with some frequency on my Instagram feed.

I’m hoping that I can remember to post more, and that my author friend – Emmeline – will also post now and then. But, until next time, namaste!

So, if you have been reading daily this month: first, bless your heart and then second, you may have noticed that I missed yesterday. I’m finding it a challenge to post daily all month, mostly because I don’t cook vegan food daily. Yep, that’s what I said.

Like many of you, I work outside the home and am also engaged in the activity of feeding my family. And that requires some negotiation of expectations (mine more than theirs) about what it means to provide a meal.

There are a number of strategies that I use to cope with the multiple challenges of working, feeding my family, getting some exercise time, doing household chores, and not losing my mind.

First, I have let go (mostly) of the idea that I need to be the cook every day. I don’t like to order out, but about once every week to ten days, we do. Last night, I was bone tired, busy, and annoyed. Mr. non-VeganAsana recommended we order pizza or something. I felt a little bad because Ms. VeganAsana Jr. was home from college and I thought I should make her a home cooked meal. But, ultimately, we ordered the pie. For the vegans, we got this great pizza from a local place, Stella’s, that is called the Salad Pie. It’s a salad on pizza crust. I meant to take a picture, but I ate it instead.

Second, I plan the week’s menu ahead so that I don’t spend a lot of time each day trying to figure out what to make. I don’t assign meals to days, because I like the flexibility of being able to decide which item to make which day depending on my time and energy level. The only exception I made to that is that I typically make the “meat” (sorry) meals early in the week right after we grocery shop.

Third, when I make something really labor intensive, like lasagna or eggplant non-parm, I try to make enough to freeze a second batch. Knowing you have a homemade meal in reserve is a good feeling.

Fourth, but related, I have embraced the leftover. When there are leftovers in my house, if they are vegan, they will be eaten. I’ll use some for lunches, but the rest will be served for dinners. I have no hesitation in repurposing items to serve them again. Chili becomes nachos or chili dogs. Spaghetti with marinara becomes spaghetti casserole. Recycling rocks.

Fifth, I have stopped feeling like I have to feed everyone, or even anyone, all the time. Three evenings a week, I have a yoga class pretty shortly after I get home and don’t want to eat beforehand. Now that Ms. VeganAsana is away at school, I just don’t bother to make a vegan meal, necessarily, on those days. If the meal I’m making happens to be vegan, that’s great, but if the omnis want something more omni (and especially if that something is also easy), then that’s what I make. I am also willing to let people forage now and then. Remember those leftovers? Those are fine to be eaten, and if the teens don’t want them, they will not expire from eating PB&J or making themselves another type of sandwich or some quick nachos from canned beans.

Those are my key strategies for making it through a week.

They are also part of why I started having VeganMoFo burnout at the end of the month, because I just don’t cook enough vegan items each week to post pictures of. I’m pretty ok with only having missed one day this month! As always, it was good to participate in the MoFo and to see what everyone else is making and writing about.

What are your strategies for making it through a week of cooking? 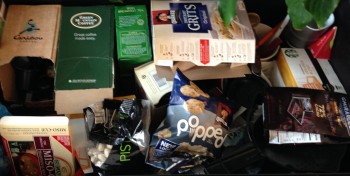 Working out of the house, it’s an ongoing challenge for me to figure out how to keep my food intake balanced across the day, so that I don’t get home from work at 6:00 and shove everything that isn’t breathing down my gullet.

I rarely lunch out of the office. Sometimes I’ll bring a lunch (today it is a bed of romaine and arugula topped with red peppers, sundried tomatoes, and tunaught croquettes), but it’s not unusual for me to miss lunch entirely. So, then it’s snacks if I don’t want to be ravenous by quitting time.

Here is a sampling of what my “snack drawer” looks like right now: 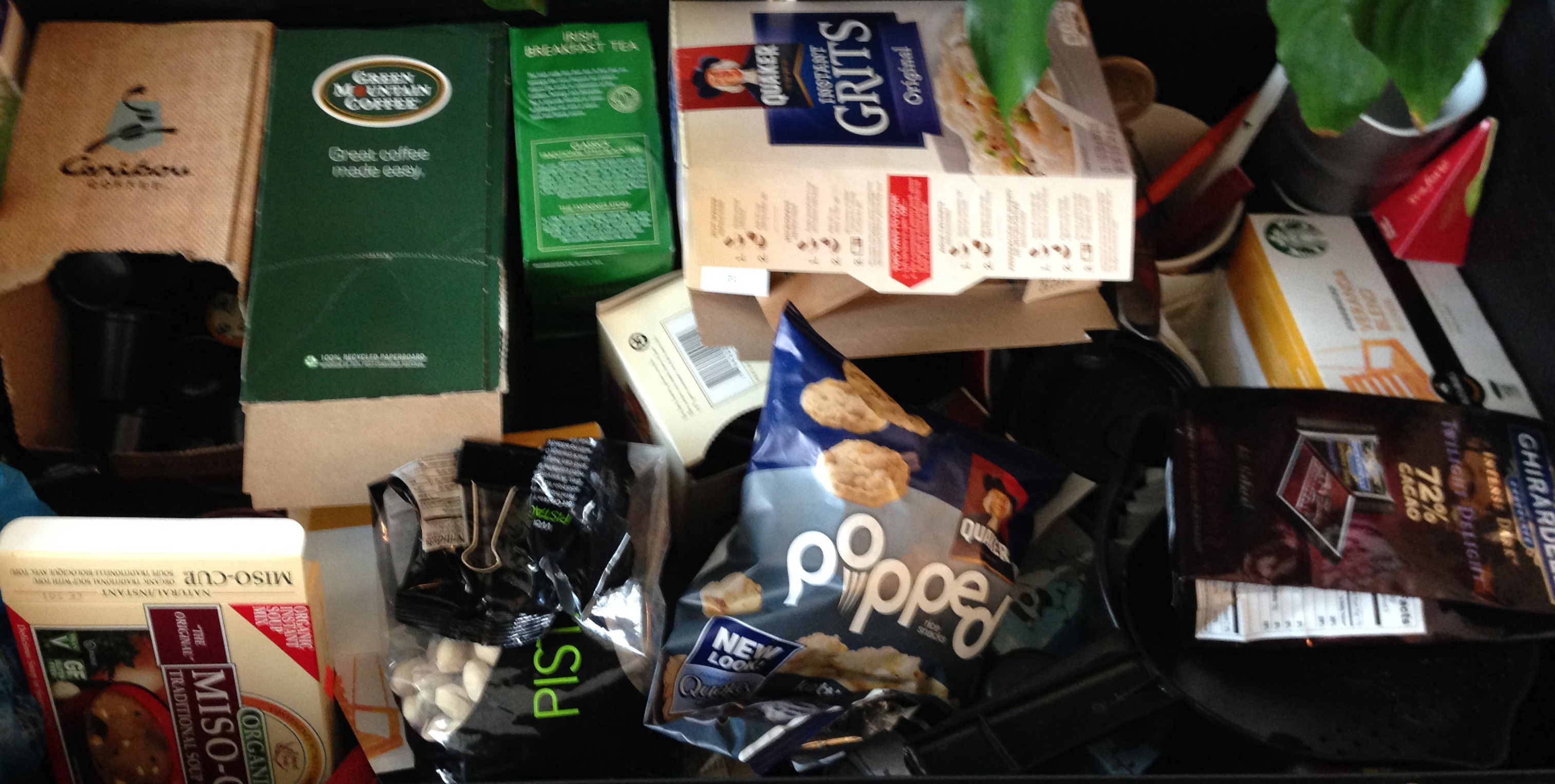 As you can see, there is quite a bit of coffee (and espresso pods are just off to the left), some miso soup, pistachios, rice cakes, grits, chocolate, and tea. It’s not the most inspired collection of snacks.

Help me out, readers! What’s in your work snack drawer and why?