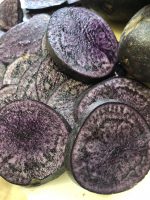 I have a tiny obsession with purple potatoes. They are so pretty! And they taste good (because… potato) and have more nutrients than an average white or yellow potato.

Tonight, as I looked through the fridge, I decided that I wanted to do something with the purple potatoes, the broccoli, the baby bella mushrooms, and some vegan bacon. So, I did! This recipe would be really easy to “un-vegan” if you wanted to make it for omnivores!

This was voted an A+ by all members of the household, and that’s saying something! So, we’ll be doing it again.

I’ve seen a variety of recipes for coconut bacon online, so today I tried fixing some myself.  It came out pretty yummy, I must say!  Sorry for the slightly blurry image.

Preheat oven to 300*  Put flakes in a large bowl and add remaining ingredients.  Toss to coat coconut (be gentle so you don’t break it up).  Spread in a thin layer on a baking sheet.  Bake for 25-30 minutes (keep an eye on it and remove once crisp, but before it burns).  Allow to cool some before use.  It can be refrigerated, but you may wish to place back into the oven for a few minutes before use to crisp it up again.

Enjoy with no bacon guilt!