This month, I’m participating in the Vegan Month of Food, which is a month-long celebration of vegan food blogging.  I’ll be shooting for a minimum of 1 vegan post/recipe every other day throughout the month.  Last year, I did every day and got a little burned out by the end.  So, today I begin with some thoughts on my recent attempt to restart my juicing habit.

Last fall, I purchased a Breville Ikon multi-speed juicer.  We promptly named him Akon and I started using him like crazy.  All went well until one fine spring day when I had a big pitcher of green juice and then 2 hours later came down with a horrid stomach virus.  After that event, the very idea of a green juice made me gag and I haven’t really done anything with him until the last week.

A few weeks ago, my friend Maria, told me about watching the film Fat, Sick, and Nearly Dead with her husband, and how it had revitalized their juicing.  It took me a bit, but eventually I watched it (highly recommend) and yep, I wanted to start juicing again for real.  So, off I went.  This week, I’ve had a 20 hour a day juice fast.  I allow myself from 6-10 p.m. to have dinner and a snack, but the rest of the day is juice only.  Over the course of the week, I’ve relearned some things about myself and juice. 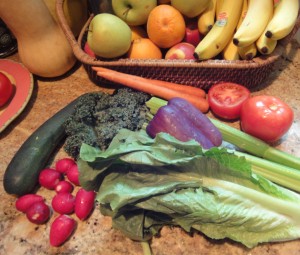 First, while I love love love fruits and veggies, I’m more particular when they are in juice form.   Just because I like a particular combination (like the image of veggies to the right) in a bowl, does not mean that I love them in a cup.  The day that I made that juice, with kale, romaine, celery, carrot, tomato, cucumber, peppers, and radishes, I really thought I would love it.  It made me literally gag – literally. I choked down a quart and a third (I am shooting for 2 quarts a day).  There was no way I could get the rest down and it had to be dumped.  Blech.

Second, I still have a problem with green drinks, but it’s getting better.  Right now, if I make a juice and it’s a light green, I can pretty much do it.  If it’s a dark fern or olive green, I start to get a little nauseated before I even taste it.  This is difficult, because I really want to incorporate greens in my juices, so I’m working slowly  to make the glasses a little greener. 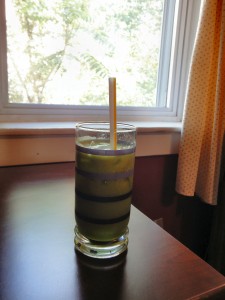 Third, I pretty much need to have some fruit in the juice to not find it unappealing.  Maybe, as time goes on, this will abate, but for now, I am giving in and just doing more fruit based juices.  Today’s combo is pineapple, 1/2 apple, 1 pear, handful of green grapes, head of romaine, 1 cucumber, and 2/3 of a zucchini.  I tend to not manage to get fruits into my diet normally, other than bananas, even though I like them, so I’m just going to consider this a win.

I already knew that I’m a bit of a carb junkie, but I had forgotten that I’m also a chewing junkie. Ha!  Having had an eating disorder for 30 years, I’ve had plenty of periods in my life where I fasted a lot.  But, that was water fasting, or full (not even water) fasting.  When I juice fast, my body knows it’s getting food and it really really wants to chew something.  A piece of gum helps, but because I’ve cut all artificial sweetener from my diet except 1-2 pieces of sugar free gum a day, I really don’t want to rely on that.  So, this is something I need to work through.

My plan is to continue this process for the next week, and then DH and I leave on a little trip to Florida.  I won’t be packing my juicer, so I know that I’ll have to let it go for that week.  Afterward, I’m considering a full 10-15 day reboot, but, I need to ponder it a bit more.

I would love to hear your juicing stories, or get your favorite juice recipes!