The revolution is not an apple that falls when it is ripe. You have to make it fall.
~ Che Guevara 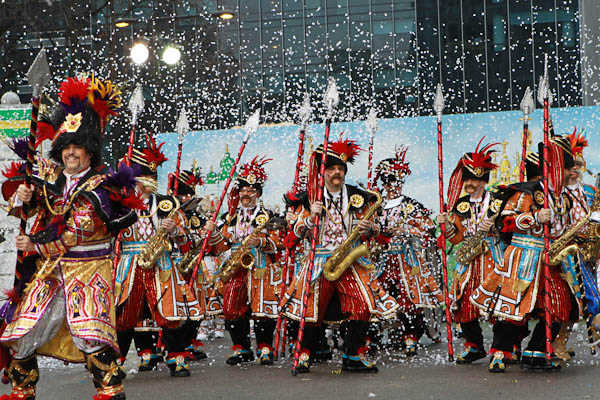 Off topic, but my favorite thing about New Year's Day - The Mummers' Parade!

I’m pretty sure that Mr. Guevara wasn’t talking about what I’m talking about, but I appreciate the sentiment.  If you want a change, you have to enact it; you have to make it happen.  I’m not much for new year’s resolutions, because something about a resolution implies that there is a very specific goal and that if you don’t reach that goal you are a failure – for the year!  I tend to end up just feeling guilty and bad when I make resolutions, because I’m usually trying to make myself do something without changing any underlying thought patterns or ways of understanding the world, and that’s just really difficult to maintain.

So, I’ve decided that instead I’m going to work on a revolution in my thinking.  I’ve been working toward this for a while, but I have a way to go, so a little more dedication to the process can’t possibly hurt.  The revolution I’m looking for is to change my beliefs about how to be in the world – not just be able to say the right thing but to really believe it.  I have always had a tendency to judge myself based on what I thought others wanted from me.  This always made me feel that I hadn’t accomplished enough of done well enough to win the approval of others (emphasis on win).  So, I can’t be skinny enough.  I can’t be attractive enough.  I can’t be a good enough scholar (despite 18 years of school).  I can’t be a good enough researcher.  I can’t be a good enough wife, mother, daughter, friend.  I can’t be effective enough at administration.  I can’t be zen enough or a “real” yogi.   Each milestone I reach, I decide isn’t really the important one (get the MA, now the PhD, now tenure, now a promotion, now another promotion, chair a department, become the dean, not enough!).  That’s a lot of failure and doesn’t really bring me happiness.

I need a new way of thinking.  I know what it is, because I talk about it on this blog a lot and I read about it in texts about yoga, philosophy, and life.  I need to appreciate not just the beauty and wonder of others, but also of myself.  I need to believe that I am enough.  I think this is going to require a shift in my underlying impetus for action.  I guess, sometimes, people need to adjust their impetus to be more about what they can do for others.  I believe that I should move the other direction and think more about how to be the healthiest me – not what I believe other people want (which is probably not even true).

How will this play out?  Ideally, I’ll worry less about my weight and appearance and more about feeding and caring for my body in a way that makes it healthy.  I’ll stop judging my yoga practice and just practice.  I will enjoy my life as wife and mother and friend and not berate myself for the things that I’m not in those areas.  I’ll do the best job I can at work and then I’ll let it go.  And, if I can make this change in the way that I think about my being, I’ll be a more settled person and the better energy I’ll give back to my relationships and to the universal connection.

This is a process, however, and I’m not going to insist that I have to “get there” in order to “succeed,” because each step is a step, right?  As a wise man has said:

Achieving genuine happiness may require bringing about a transformation in your outlook and way of thinking.
~ Dalai Lama