Lessons Learned from a Furry Friend

This past week, we lost a long-time friend, our male cat, Rudy.  Of course, we are all feeling sad about not being able to see his furry face every day, but we are also very grateful to have had him in our lives for 7 years.  I’ve posted before about my cats being yogis, and I was only barely kidding.  In Rudy’s short lifetime, he taught me a number of important lessons, and I will always appreciate that teaching and remember him when I think about these things.

Rudy taught me about the joy of really resting.  Many cats, when they rest, will lay on their stomachs 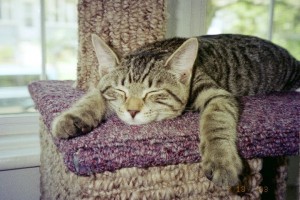 , all limbs tucked in and head erect – not Rudy.  Rudy rarely ever slept this way.  When he rested, he RESTED!  He would plop right over onto his side, stretch out as far as he could, snuggle deeply into whatever (usually soft) surface he had chosen, and sleep deeply.  He could, and would, sleep through significant noise, and even being moved from one location to another.

In a similar vein, Rudy showed us the importance of picking your battles.  While our other cat will fuss or squirm if you pick her up (and she might rip off your face if you try to trim her nails), Rudy was very mellow about almost everything.  Frequently, Emmeline would pick him up and carry him, like a baby, around the house.  I don’t know if he liked it, but he never really fought it.  If the dogs hassled him, he would just move out of their reach onto a high surface and ignore them.  When we would take him to the vet (another event that can earn you a scratch from Charlie), he would relax calmly on the table, letting the vet examine, poke, prod, and manipulate at will.  Rudy was truly a “cool” cat and his mellow mood was catching.

While Rudy picked his battles, he also reminded me that once you decide an issue is worth fighting for you must pursue it with all persistence.  Rudy liked to stay up at night.  And he liked company.  So, if someone was asleep that he wanted to be awake, he worked to his utmost to make that happen.   He would begin with some meows.  If that didn’t work, he would move on to climbing on the head of his intended companion.  If the result still wasn’t pleasing him, he would begin “patting” whatever skin on the head area he could reach (and he patted with claws).  His last resort would be to proceed to any table/desk/nightstand in the room and methodically begin throwing items onto the floor, checking between each to see if his friend had awoken.  If locked out of the room his buddy was in, he would open doors with his paws or climb furniture to leap through the transoms and get to the person he wanted.  Tenacity?  You betcha!

Rudy was also a fan of those little ritualized moments that happen between beings that care for each other, but that we can begin to take for granted.  It was obvious that he found them important and wanted to be sure they were maintained.  In the mornings, if someone wasn’t up by the time Rudy was accustomed to the feeding ritual, he would let us know, loudly and repetitively, that it was time for this family interaction to begin.  In the evenings, about 10 p.m. – as if  he could tell time – he would appear in the office, look at Derek, and quietly announce, “meow.”  This would be followed by an intense stare.  The meow and the stare were the start of a process involving the procurement of 5-6 pounce treats from the pantry in the kitchen, and he observed this ritual on a very regular basis.

Finally, Rudy taught me that it is possible to get your message across, if you keep trying, even when the  other being doesn’t understand how you think or what you want, and even if you don’t speak the same language.  When Rudy was a few years old, he began urinating in unusual places, including the sunroom and Jacob’s laundry basket.  We took the measures we could think of (scooping the cat box more often, reminding Jacob to wash his clothes, checking Rudy for bladder infections, installing cat calming plug-ins), but the messes continued.  Rudy kept upping the stakes, peeing on more surfaces, and making them places that were even harder to clean (like INSIDE of Derek’s briefcase, in Emmeline’s doll cradle, and all over the top bunk in Jacob’s room).  He even escalated to leaving excrement messages in these places.  Finally, after literally years of cleaning up, it occurred to me  that maybe he didn’t like running the dog gauntlet to get to the liter box.  So, we added another one upstairs and voila! – problem instantly solved.  We were rather dense about it, but Rudy kept trying to communicate his issue in more and more obvious ways until we finally were able to see what he was trying to tell us. 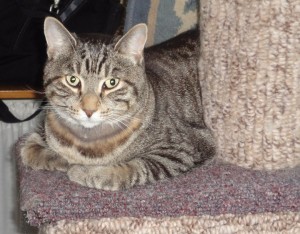 These are just a few of the highlights of what Rudy brought to my life (along with many nuzzles and purrs and catrobatics).  I know that I will continue to miss him, but I also know that he will never really be gone.  He is part of me and part of us.  Though I’m sad, I’m happy to have learned and loved with our fuzzy friend Rudy.

6 Responses to Lessons Learned from a Furry Friend