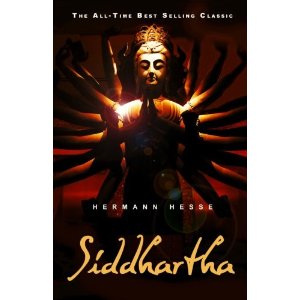 In yoga teacher training this week, we discussed the final niyama, isvarapranidhana.  Isvarapranidhana refers to the idea of surrendering to the divine.  Coincidentally, the day before I had read the book Siddhartha by Hermann Hesse.   In this novel, the main character, Siddhartha, embarks upon a quest to find the divine, and to establish how he might best surrender to it (that’s quite the bullion cube explanation of this story, but it works).  As we talked about this niyama in class, and as I considered it afterwards, and during my time observing a class today, I thought about the book and how I might utilize it to work through my own understandings of isvarapranidhana.

For those who haven’t read the book, a little synopsis (plot spoiler ahead).  Siddhartha is the son of a Brahmin (not to be confused with Siddhartha Gautama – or the Buddha, though a contemporary in the story), very skilled in the practices and philosophies of the Brahmin and a “star” of the community, but he is not confident that what he has learned has really allowed him to fully see, or surrender to, the divine.  So, he leaves the family seat and becomes an ascetic, giving up all of the pleasures of the physical form.  Eventually, after much time passes, he encounters the Buddha and his teachings, and, though compelled, feels that what he perceives as the dualism of the philosophy is ultimately unsatisfactory.  But, this encounter convinces him that the ascetic path is not helping him to reach the divine either, and there is something to be said for the glories and wonder of the physical.  He becomes a trader (and lover of a very “learned” woman) and enters a worldly and refined life.  This too proves to be not the answer for which his heart is searching.  In confusion, he leaves the city and wanders, finally alighting in the company of a simple ferryman he had met years before.  As he stays with the ferryman and becomes his apprentice, he finds the answers he has been seeking in the voice of the river and the way in which it speaks of the unity of all things (the Om).

The story is interesting to me as a story, but also as a parable of the life of seeking “TRUTH” and the divine, and the ultimate slipperiness of those ideas.  As Hesse writes in the text, “When someone is seeking…it happens quite easily that he only sees the thing that he is seeking; that he is unable to find anything, unable to absorb anything…because he is obsessed with his goal. Seeking means: to have a goal; but finding means: to be free, to be receptive, to have no goal.”  This feels right to me.  When we hold on to one TRUTH and one reality, how can we hope to learn anything beyond or in addition to it?  If I already know what “bliss” or “enlightenment” will feel like, what happens if I’m wrong and I actually achieve bliss?  Will I even notice that I have?

While the point is made in the text that we have to stop looking so hard for what is the divine, because it’s not something we can find and claim and own, in the end, the experiential world provides Siddhartha with some clues about where divinity exists in unity.  “The river is everywhere at the same time, at the source and at the mouth…in the ocean and in the mountains, everywhere, and that the present only exists for it, not the shadow of the past, nor the shadow of the future…Siddhartha the boy, Siddhartha the mature man and Siddhartha the old man [are] only separated by shadows, not through reality…Nothing was, nothing will be, everything has reality and presence.” Nice.  Time is a human concept. We put labels on things and place some in the past and some in the future.  What if it isn’t a line?  What if all that was and all that will be is now?  Then the beauty and unity and wonder of every thing is in every thing. Yes?  The divisions between are ours – our constructs.

(lifting a stone) “This,” he said playing with it, “is a stone, and will, after a certain time, perhaps turn into soil, and will turn from soil into a plant or animal or human being. In the past, I would have said: This stone is just a stone, it is worthless, it belongs to the world of the Maja; but because it might be able to become also a human being and a spirit in the cycle of transformations, therefore I also grant it importance. Thus, I would perhaps have thought in the past. But today I think: this stone is a stone, it is also animal, it is also god, it is also Buddha, I do not venerate and love it because it could turn into this or that, but rather because it is already and always everything– and it is this very fact, that it is a stone, that it appears to me now and today as a stone, this is why I love it and see worth and purpose in each of its veins and cavities, in the yellow, in the gray, in the hardness, in the sound it makes when I knock at it, in the dryness or wetness of its surface. There are stones which feel like oil or soap, and others like leaves, others like sand, and every one is special and prays the Om in its own way, each one is Brahman, but simultaneously and just as much it is a stone, is oily or juicy, and this is this very fact which I like and regard as wonderful and worthy of worship.”

So yeah, what can it mean to take this idea and apply it to the notion of isvarapranidhana?  Well, that’s a challenge, because, as Hesse also says (through Siddhartha), as soon as we put such ideas into words they loose something (which I’m definitely experiencing as I write this post).  Something here speaks to me, however.  It’s the same something, though expressed in a different way and with more emphasis on detachment and less on love, in Buddhist teaching.  While I struggle with the idea of giving up my efforts to any particular god or gods, there is something in this notion of unity and oneness and completeness (yep, having trouble finding words for it because all of our words are based on temporal reality and division).

As Siddhartha reaches his ultimate state of understanding in the text, we learn that he is “one who is no longer confronted with conflict of desires, who has found salvation, who is in harmony with the stream of events, with the stream of life, full of sympathy and compassion, surrendering himself to the stream, belonging to the unity of things.”  That, I think, I can get behind.  Of course, maybe the question is how.  But, maybe it’s not, as well.  Because in seeking a way to surrender, perhaps we fail to really surrender…

Something to ponder (or not).

4 Responses to Isvarapranidhana and Siddhartha