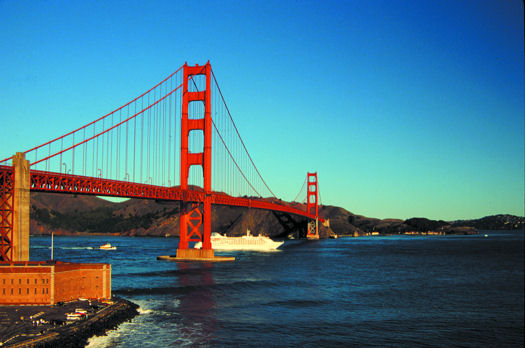 We build too many walls and not enough bridges.  ~ Isaac Newton

I’m currently in San Francisco for a conference, so I missed posting yesterday (woohoo for a long time on a plane).  So, today will be a combined post of my experiences thus far for the trip.  Traveling vegan can be a little tricky at times, but I had high hopes for this one.

The trip began with the flight (duh).  If you don’t already know this, do not be a vegan on US Airways.  You may starve to death.  Even if you are willing to spend the ridiculous amount they charge to get a snack, you cannot, as there are no vegan items.  There is also no form of non-dairy creamer, so you should also not want coffee.

I arrived in San Francisco tired and hungry, and very unprepared (had not researched how to travel from the airport at 9:00 at night to Union Square area).  So, I decided to just suck it up and grab a cab.  Have money if you want to travel by cab in San Francisco.  The cab ride was short (10 minutes or so) but was $42.  Ouch.  Thank goddess that cabbies can now take credit cards!

My roomie was already asleep and I was still sort of jacked up from the trip and hungry, so I made my first foray into eating vegan in SF.  I happened upon a restaurant called Ponzu, where I ordered the spicy roasted garbanzos and root chips.  Not only were these snacks vegan, but they were also delicious and inexpensive ($9 total, I think).  Sweet!  And then, off to bed!

Morning arrived early (like 4:30 a.m. early) so after coffee and getting ready, I ventured out to find a bagel place.  The hotel concierge waved vaguely at the street and said “lots of places have bagels; walk that way.”  I’m not sure that “concierge” means what he thinks it means. I did have an 8:00 presentation to do, so I couldn’t go too far afield. After walking in about a 6 block radius and finding not one bagel shop, I ended up back at the conference hotel with a plain white bagel from a Starbucks satellite.  Hmmm…

By the time lunch rolled around, I was famished, because simple carbs for breakfast do that to me.  So, again back to the desk to inquire as to a close place with vegan friendly lunches.  I was sent to David’s Deli.  Do not be a vegan at David’s Deli.  Do not be in a hurry at David’s Deli.  Nothing on the menu was vegan really, so I opted for a side salad and a side of fries, with an iced tea.  The tea arrived, but sadly was not vegan due to the small critter floating in it.  I switched to bottled water.  1 hour later (no, seriously, I’m not exaggerating at all), my lunch arrived.  It was iceburg lettuce with 4 slices of cucumbers and 3 tomato wedges, along with a small plate of underdone fries.  This, my friends, will set you back $20 with the tip.  Sweet.  Do not attempt to travel in San Francisco without plenty of cash.  I need an ATM, stat!

Tonight, I have more time and am more prepared, so it’s off to a highly reviewed vegan friendly restaurant called The Plant. It is local and organic, so I have a good feeling that this is going to be good!  But, now I must hit another meeting and then the yoga mat, so that’s a post for another day.  I hope you enjoyed my boring travelogue of 16 vegan hours in San Francisco.