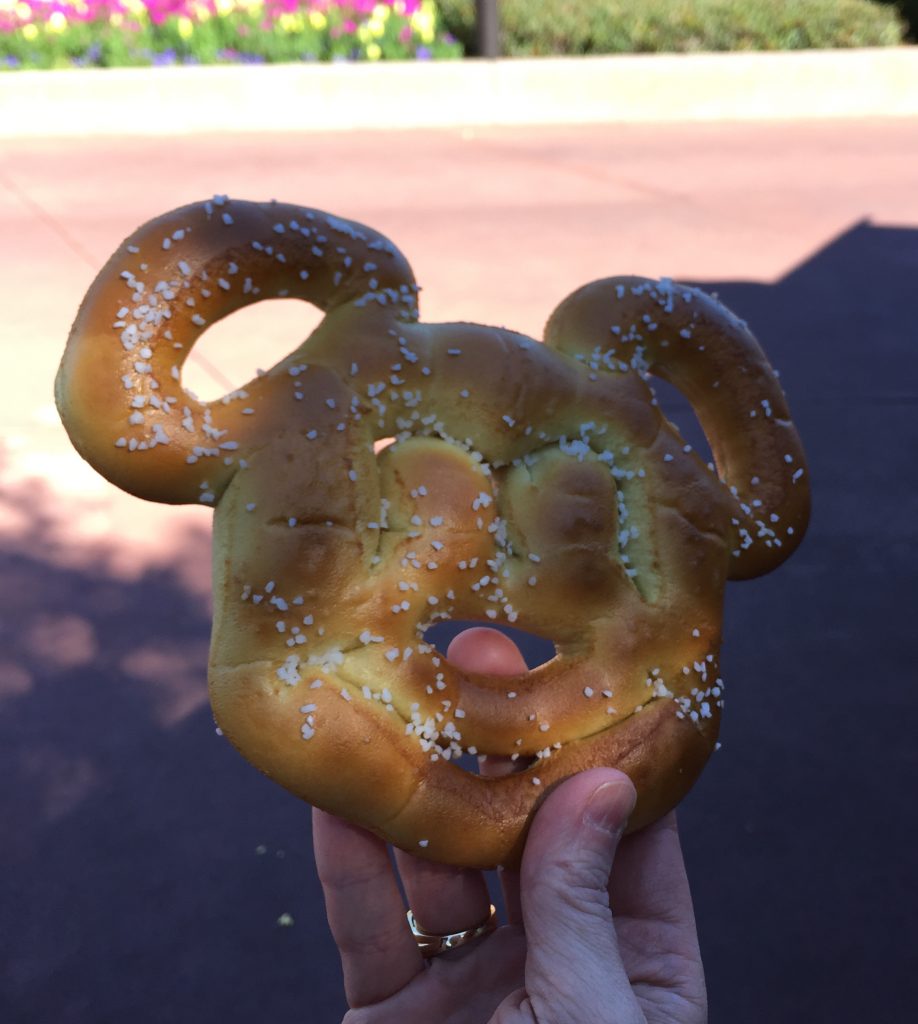 I’ve posted about dining at Disney World as a vegan before, but if you are a Disney fan you know that the menus change often. So, it seemed like a good time for a new post! We were in Disney this week, traveling with 3 vegans and 5 omnivores. Good times and good food were had by all!

Day 1 – We arrived in Orlando and took a side trip to Disney Springs (previously Downtown Disney), where we stopped at Erin McKenna’s bakery and had some soft serve. 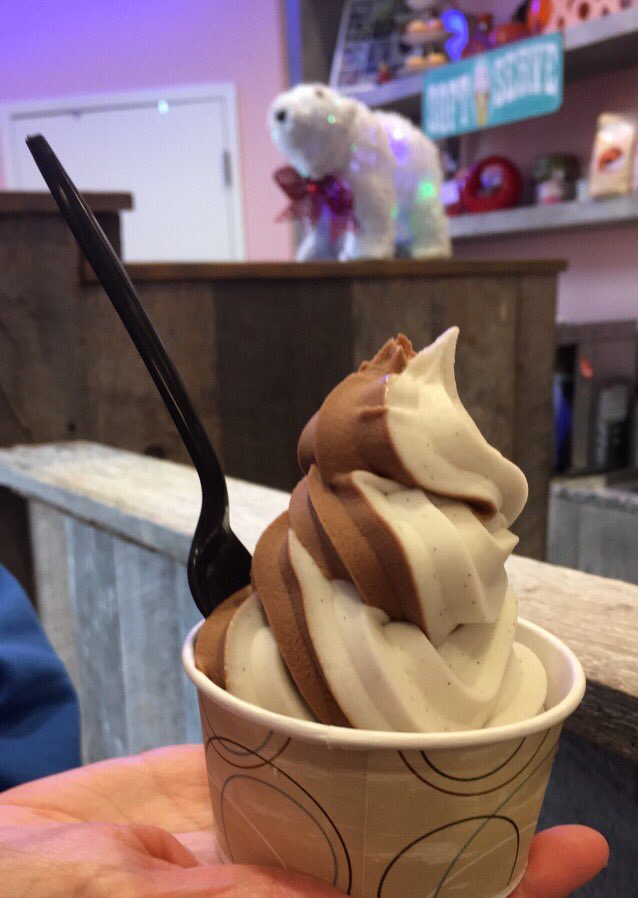 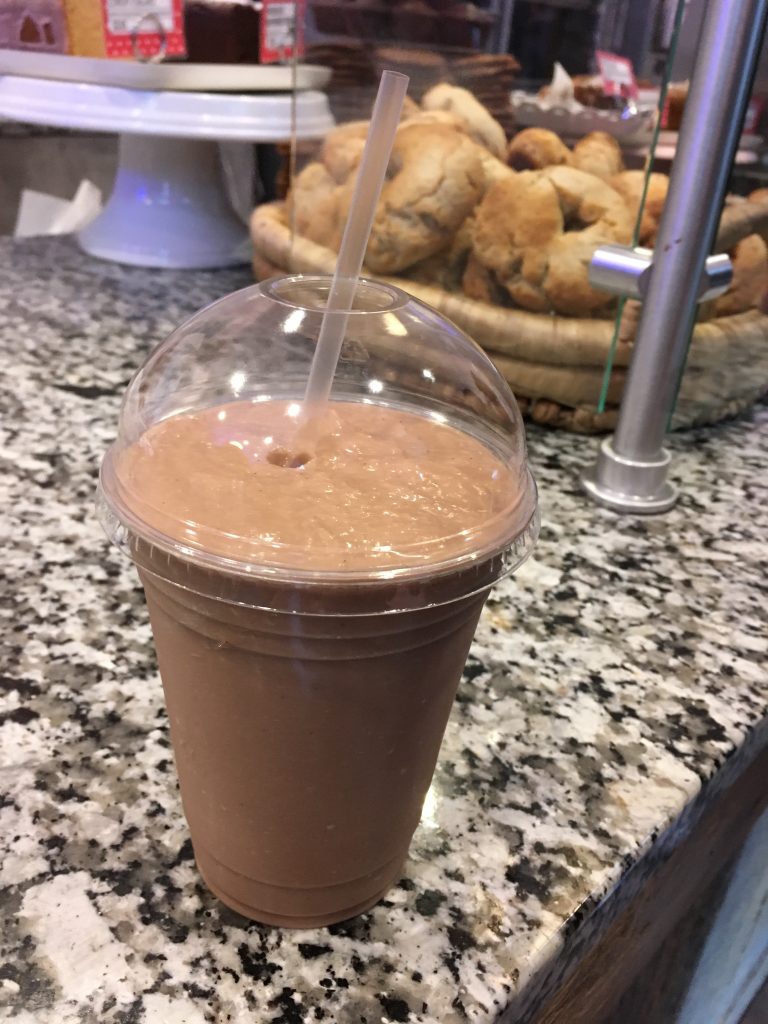 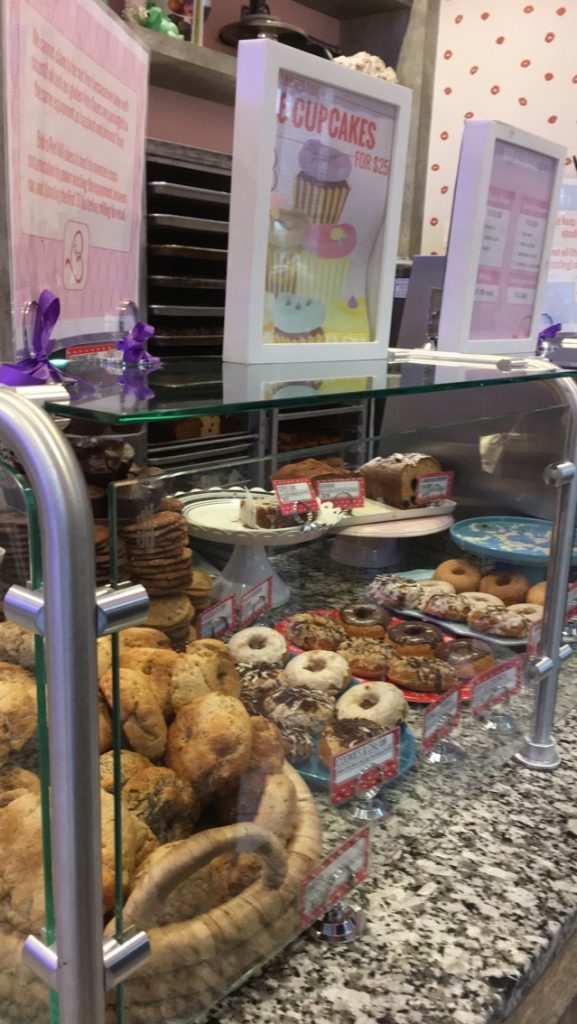 After settling in we met up at Boma. We have had good Boma experiences in the past, but this wasn’t the best. The restaurant was packed (it was the night before the marathon, a Saturday, and really cold out). When the chef came out to explain to us what the vegans could eat, he was clearly not pleased about it. He walked us through the buffet, pointed out things we could eat, noted things that could be made more vegan friendly (i.e. the pasta sauce with meatballs) but didn’t say how to make that happen, explained that there was not dessert, and then said “will that do?” Being friendly, we said sure and made the best of it. Later, he did come out with a bowl of a nice vegetable curry. Sadly, after a 16 hour drive we were all a bit brain addled and we forgot to take a picture of that dinner. We would probably still give Boma a good overall review if you like buffets.

Day 2 – We had intended to go to the parks, but it was very chilly, so we decided to tour Disney Springs and catch a movie. We saw Moana and ate way too much popcorn. If you haven’t seen Moana, you should!

Day 3 – We got an early start at Animal Kingdom. After some trips on Everest, a nice safari ride, a little Lion King, some Bugs Life, etc., we dropped by Tusker House for lunch. We were a little alarmed by the check ($50 each for lunch is steep!) but the food was excellent. While the chef here visibly rolled his eyes at the start, he warmed up while showing us the items and the selections were plentiful and delicious. There were even cookies for dessert. 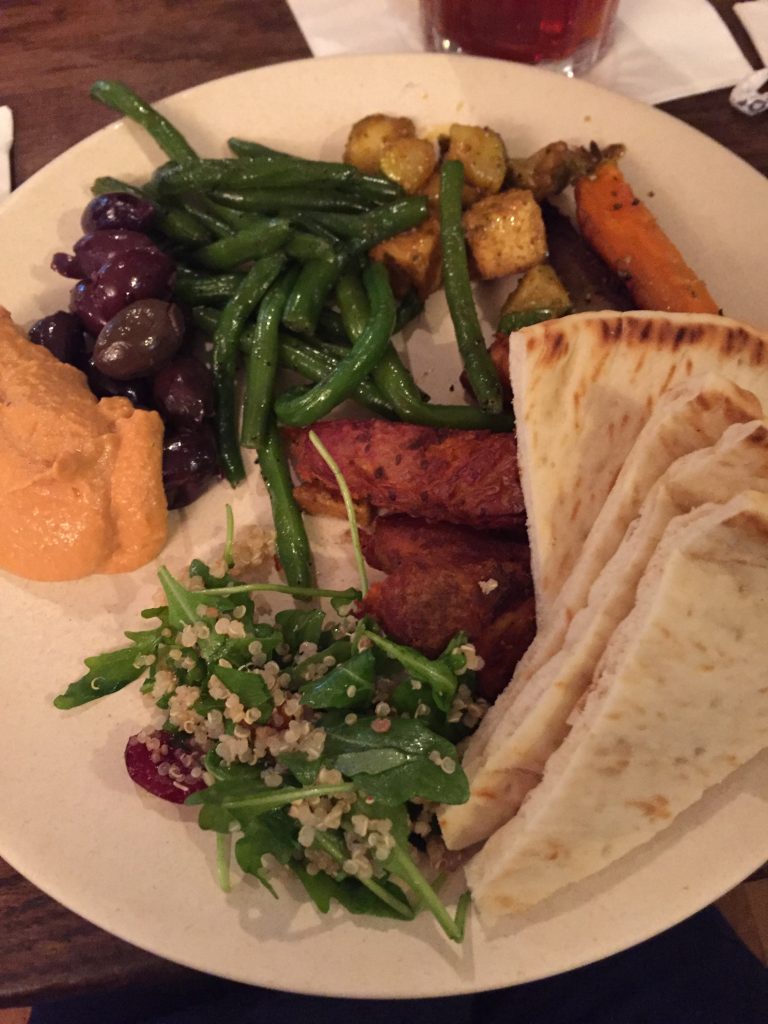 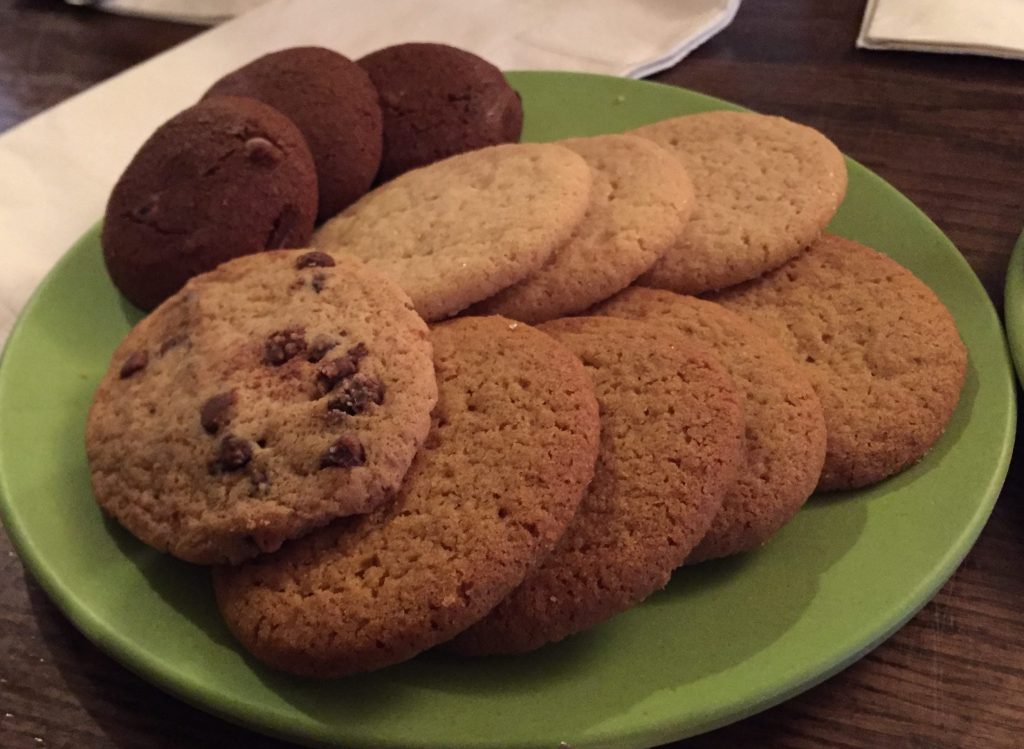 Since Animal Kingdom is usually a pretty quick day for us, some of the group also dropped in at Epcot for a few rides in the evening.

Day 4 – Hollywood Studios was on the agenda for day 4. We mostly enjoy this park for Rock n Rollercoaster, Tower of Terror, Toy Story Mania, The Great Movie Ride, and Muppets 3D. For this trip, we decided not to eat in the park (though some pickles and other snacks were had) and instead saved our hunger for the day’s dinner.

Dinner was at Trail’s End restaurant in Fort Wilderness. GPS in both cars took us the wrong way, so getting there was rather an adventure. Once you arrive, finding the restaurant is also a challenge and weirdly the signage is lacking (unusual at Disney). But, the restaurant was kitschy country with good food for the omnivores and AND the amazing and fabulously kind Chef TJ!!!!  If you haven’t heard of Chef TJ, he is a Disney chef known for his kind and generous treatment of those with special dietary needs. We were on pins and needles waiting to see if he was actually there. And then, good news, he was! He came out and chatted with us, and then the feast began.

There were several courses including samosas, nachos, a wonderful cream of broccoli soup (not pictured here), a beautiful and delicious entree with tofu and vegetables, and a dessert that was a tower of fried goodness and fruit. Mmmmm…. 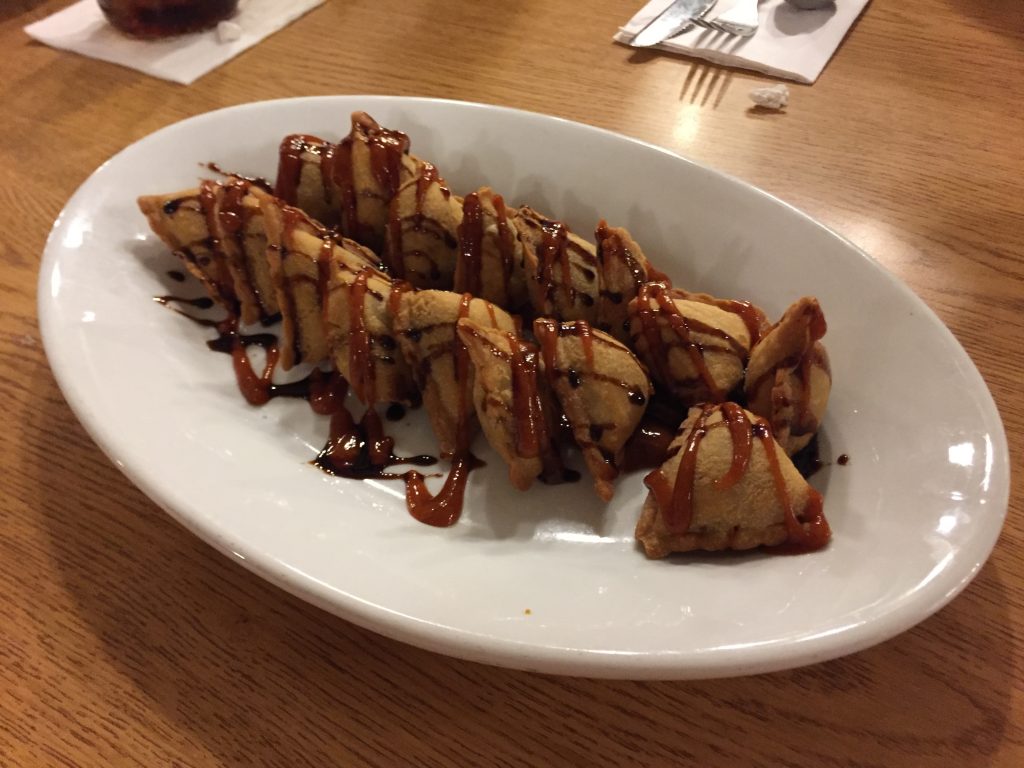 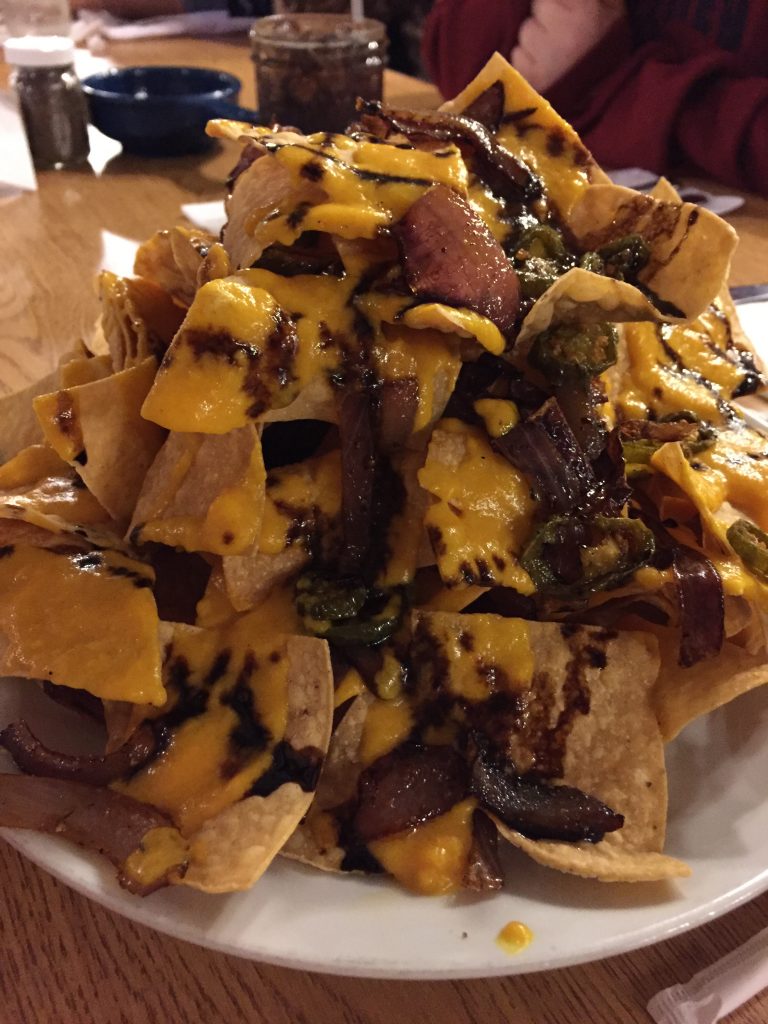 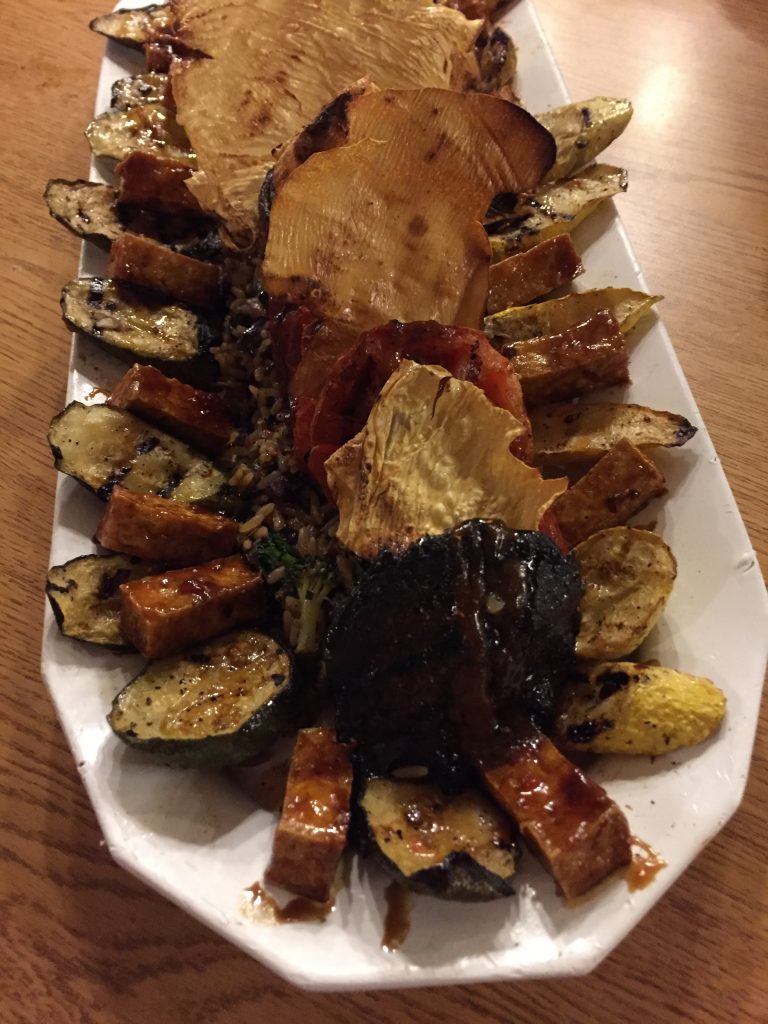 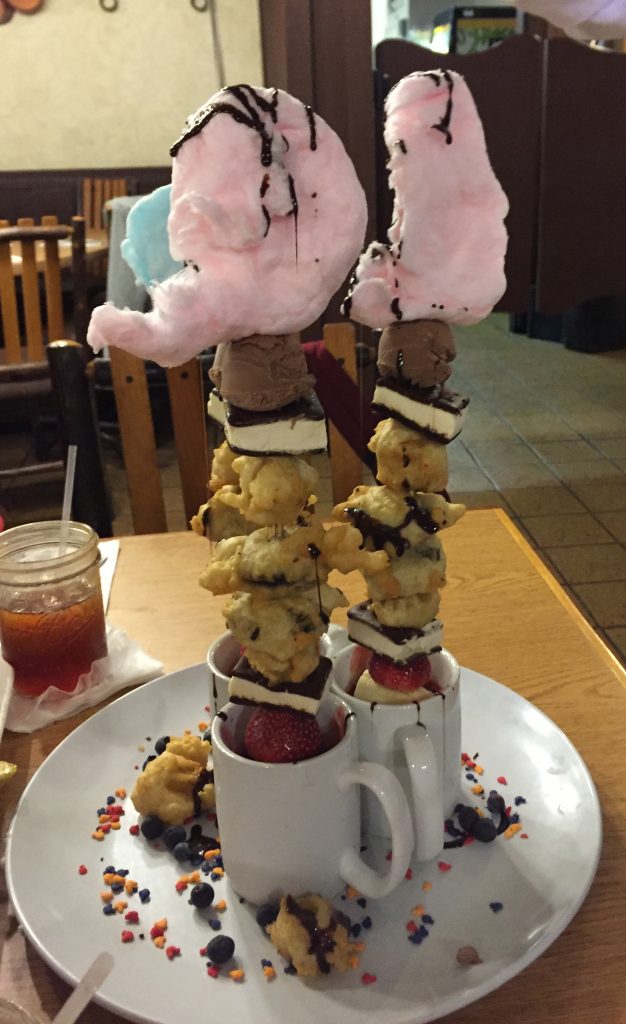 We practically had to roll back to our car (with takeout boxes). 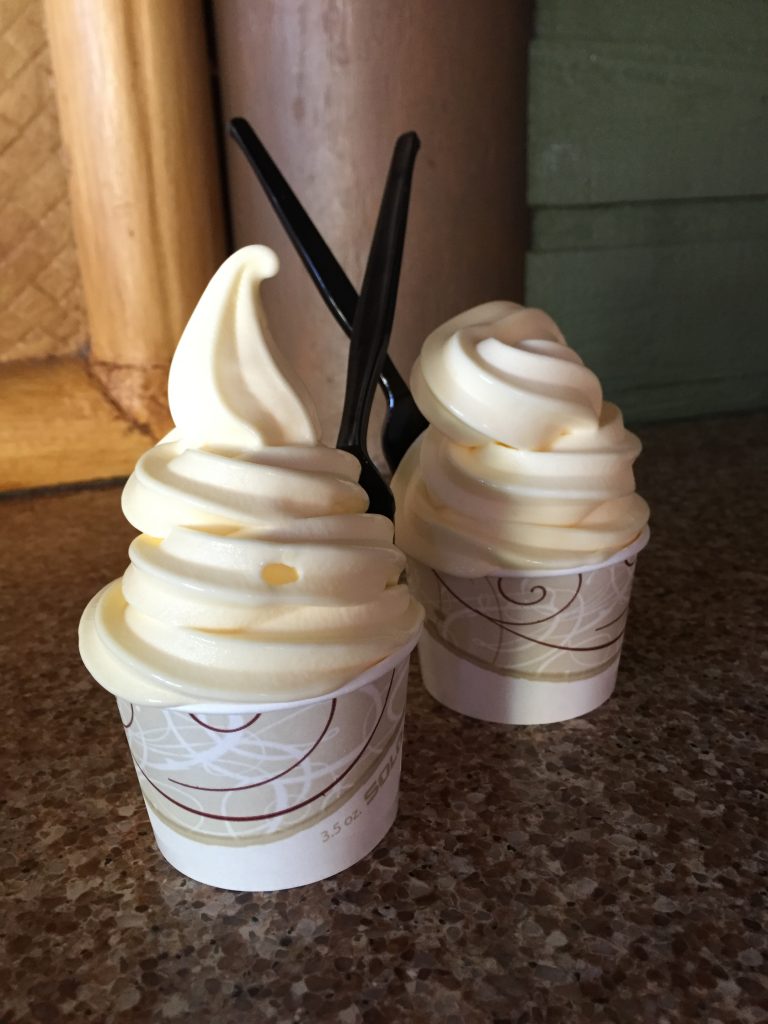 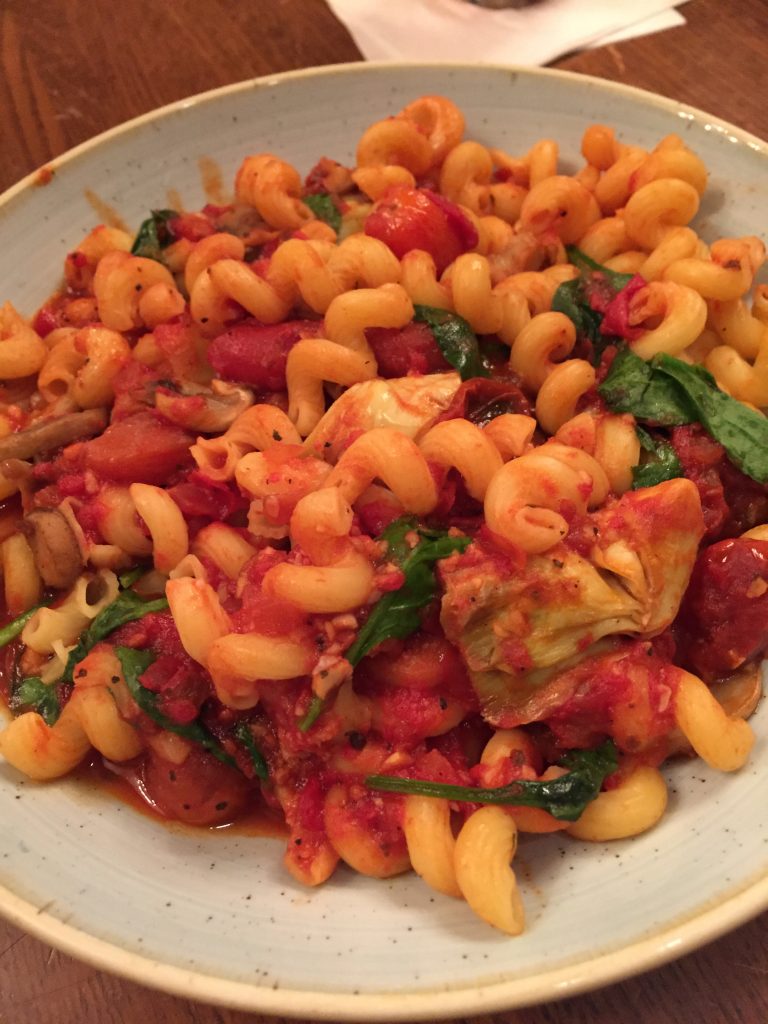 Day 5 – Our full Magic Kingdom day was Day 5. We had fun trying to do the rides in a different order (not beginning with Space Mountain as we usually do), and then went to the Liberty Tree Tavern for lunch. In the past, we have had some delicious vegan burgers and sandwiches at the Liberty Tree, but all of that is now off the menu. We were presented with an allergy menu that had no vegan items, so the chef came over and offered a pasta dish with vegetables and marinara sauce. It was quite good and we had some fries as an appetizer because… fries.

For dessert, we had a Dole Whip for the first time.

We only recently were told these were vegan and we hope that is correct. They were quite delicious!

Day 6 – Off to Epcot at the start of the day! It was a little crowded due to early magic hours, but we still managed to see all of the attractions we hoped before our lunch reservation at Teppan Edo in the Japan pavilion. Teppan Edo is a hibachi-style restaurant. With a group of 8, we just fit at a table. Everyone was pretty happy with the offerings, which included a vegetable and tofu plate (made without butter and substituting white rice for the beef rice). Our chef was a woman, which was new to all of us for hibachi, and she did a wonderful job with the preparation.

After lunch and some tooling around in world showcase, some delicious margaritas from La Cava del Tequila. This little tequila bar used to be an unknown treasure in the Mexico pavilion. Now it’s a known treasure. The handmade and delicious (no sour mix!) margaritas here are not inexpensive, but they are very good. We sampled the Minty Pineapple, the Dragones Top Shelf, the Jalapeño, and the Guava, and all were pronounced good. Somehow, we also ended up eating guacamole and chips….
What can  you do? 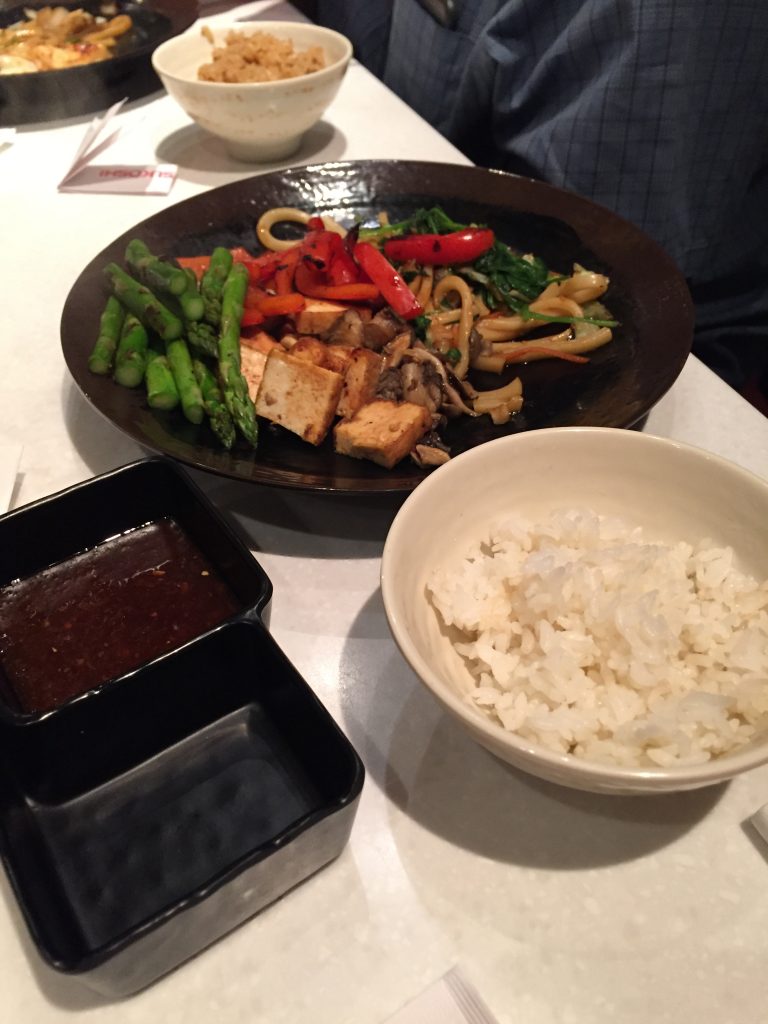 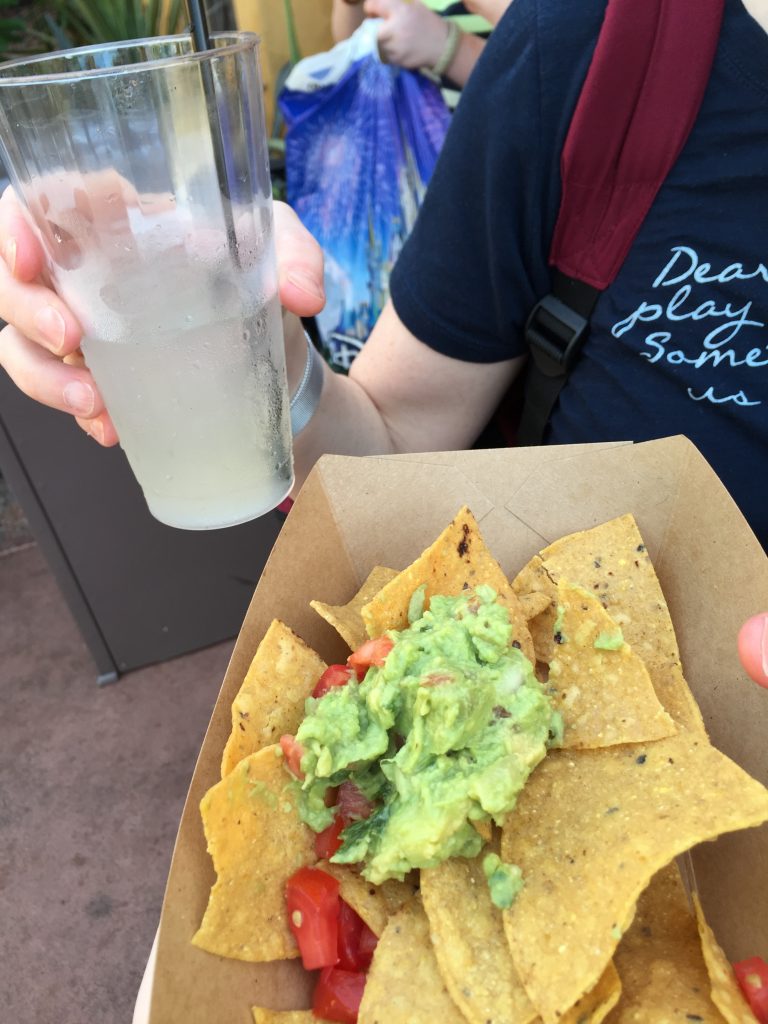 Day 7 – The last day is always our “parks du jour” day. This trip, we started in Epcot in the morning, where we got to experience Soarin’ two more times, Test Track, the new Pixar Film Festival attraction (very cute), Journey into Imagination, and then headed over to the World Showcase where the International Festival of the Arts was happening. We wandered, saw some art, drank some beer and ate some “chips” in England.

Then, we moved over to Magic Kingdom for another trip on Space Mountain, a visit to the Carousel of Progress and the Hall of Presidents, a Mickey Pretzel, and some Tofutti on Main St. 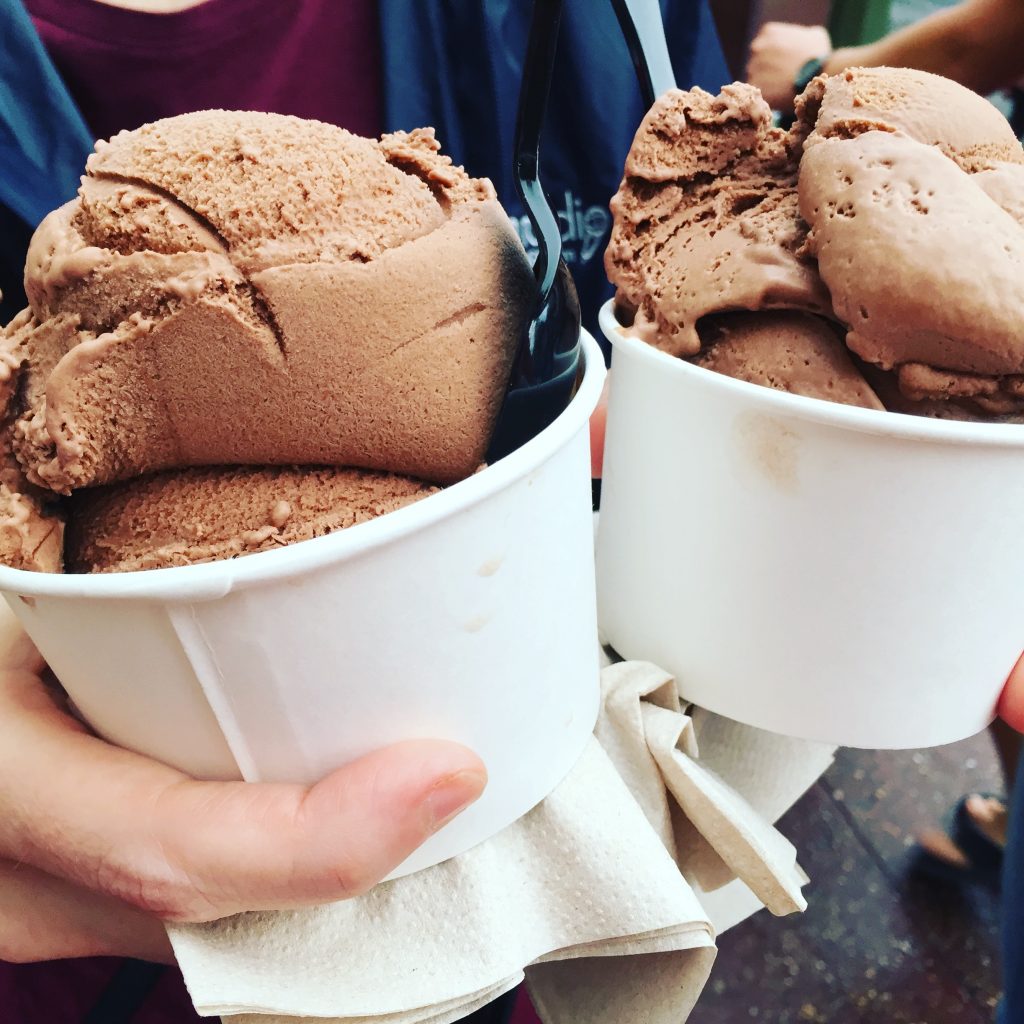 It turned out to be a very rainy evening, so we called it a day a little earlier than planned and headed back to start the packing.

All in all, it was a week of delicious food and we are all happy that we walked many miles to counteract everything we ate!

One Response to Vegan Disney World 2017