Ringing in the New Year at The VeganAsana House

As is our usual plan, on new year’s eve, we spent the evening at home with the family, eating until we almost exploded, watching movies (including Despicable Me and a couple of Marx Brothers films), and drinking exciting things like soda and water.  It’s a fun family tradition, and even the 19 year old elected to stay for the first part of the night.  The menu was not entirely vegan, but it was mostly vegetarian (except for some sliced pepperoni and a little ground beef for nachos) and there was plenty of vegan faire. 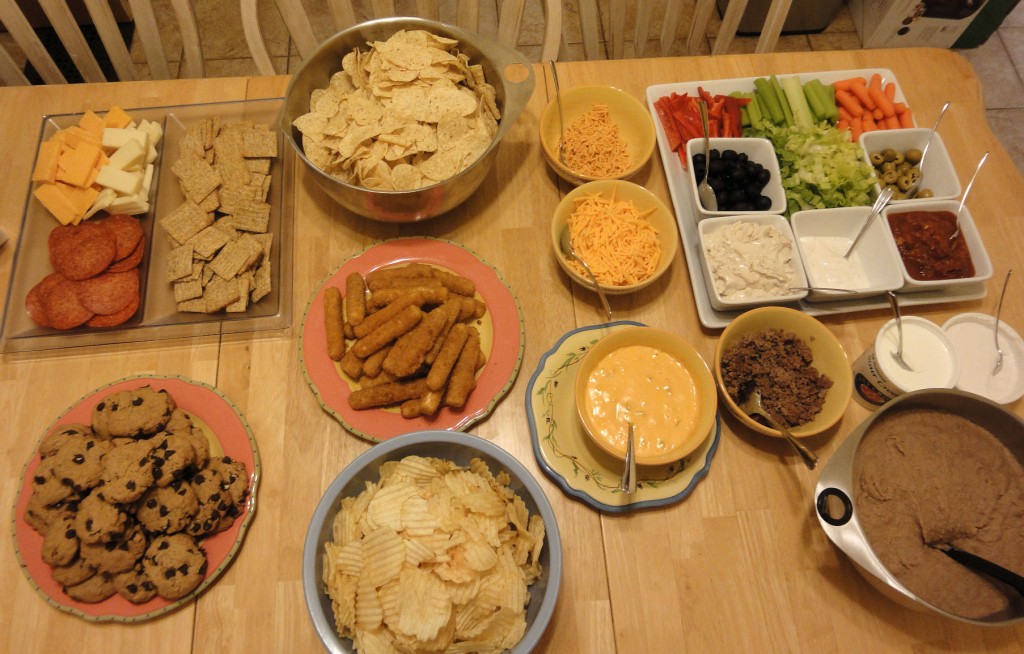 The featured item was nachos, including tortilla chips, vegan refried beans, regular shredded cheese and Daiya, con queso, ground beef, salsa, regular and vegan sour cream, black and green olives, and hot sauce.  I think everyone had more than one plate of that!  We also had veggies with ranch and (vegan) French onion dip, potato chips, crackers with cheese and pepperoni, mozzarella sticks, and vegan chocolate chip cookies (recipe from Vegan with a Vengeance).  I had planned to make big pretzels as well, but realized that there was already a lot of food on the table, so I stopped!

The children anxiously awaited the official “starting time” of the gorging yourself portion of NYE and, when released to begin at about 6:45, they descended on the table en masse.

Luckily, this year, no one became violently ill (even with the combination of nachos, cookies, and orange soda that one consumed) and much fun was had by all!