Home Remodeling as a Metaphor for Life 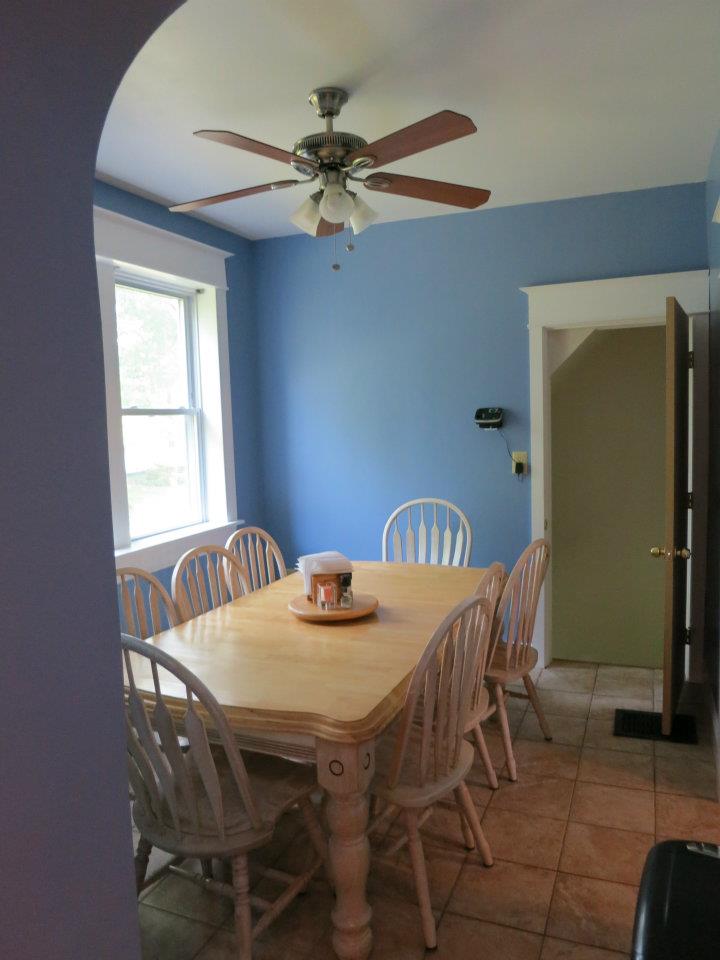 You’ve probably picked up on the fact that there has been a lot of remodeling going on at The VeganAsana house lately. We have had both bathrooms redone (picture post re the second one to come soon); painting was done in the kitchen/hall/stairwell; some repairs were made to walls and ceiling in the office, a bedroom, and living room; and the yard was landscaped. As we were working on some of our tasks over the weekend, it occurred to me how much these “creating a home” tasks are like the whole rest of creating a life. I guess that’s not surprising, as all systems share characteristics, but it struck me strongly.

All is imperfect. I find myself often wanting these home remodeling tasks to result in perfection. I want the tiles to be perfect, the paint to be without a streak or a run, the colors to match precisely, the plants to all look green and luscious. Yet, like in all of life, there is no “perfection” in that sense. Some of the plants haven’t done well in the heat, there are spots on the wall where paint clumped or ran, the tiles on this corner of the shower wall weren’t set the same way as the tiles on that corner, there is a scuff on the marble window sill. All of this can drive me to near distraction if I let it.

Gregory Bateson characterized humans as being “rotten with perfection.” Our seeking of perfection in self and other, in things and beings, can lead to pain both personal and global. The drive for perfection can create impossible standards for appearance, behavior, relationships, and abilities. If the ultimate desire for anything is total perfection, nothing will ever reach it. We will constantly be critiquing our relationships, berating ourselves, touching up the paint on the ceiling, or worrying about the grout. The attachment to the idea of the “perfect _____” must be released for our own good and the good of others. 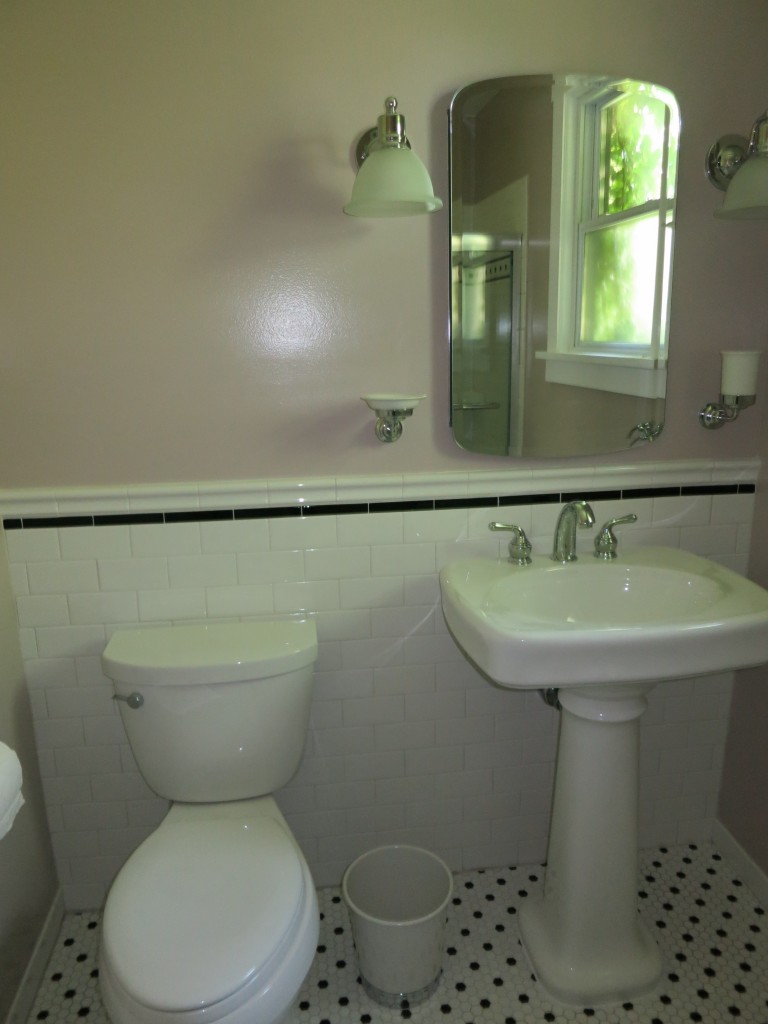 The imperfect can still be just right. During the unfolding of all of these processes, I’ve had to (often with the urging of Mr. VeganAsana) to let go of my fretting about things being exactly so. For example, in the downstairs bathroom the closet door became an issue for a while. It had three hinges before the renovation, but when it was put back only two were replaced, and the opening for the third hinge was filled in. We scraped/chiseled out the fill and tried to replace the hinge, but it no longer set properly and immediately began to separate from the wall, pulling the upper hinge with it. In my worry about it being perfect, I initially thought we would need to replace the entire door, which would have meant a custom door due to the size, and some wait time. So, for the interim, I filled and painted the hinge spaces on both the door and the frame. Weeks later, the “imperfect” door seems just fine.

Worry is suffering over what has not happened yet, and may never happen. Oh, the worrying. I have fretted myself and everyone around me into misery more than once during all of this. On one occasion, I spent an entire night awake worrying about how to approach the contractor regarding some tiles that were incorrectly placed. I created so many scenarios in my head where he didn’t take the news well and it wasn’t good for our working relationship. The next morning, when I broached the topic, he immediately saw the problem, apologized, and started planning the fix. Ten hours of worry for a ten minute conversation; it wasn’t worth it. How many times in a week, in a day, do we do this? It sucks so much energy away from the now to be fussing over what may never occur.

Plan, and then let it go. In home repair and remodeling, as with most things in life, it’s good to have a plan. Without one, it can be even more difficult to get things done. We’ve found ourselves “stuck” a few times in getting this stuff done until we came up with a plan for how to proceed. Even things like bathroom storage require some strategy. But, once the plan is created, it’s important to be willing to let it go. We had planned a towel bar in one bathroom. After it pulled out of the wall, we were in a pickle regarding how to proceed. For now, we’ve decided to let go of that plan and just patched the wall and painted. We had planned a certain glossiness of tile and didn’t get it in one bathroom. Short of having all the tile ripped out, we needed to let it go. In the initial landscaping, there were two more trees than there are now. They didn’t make it. Let it go. Letting go of expectations is an ability that crosses all life domains. 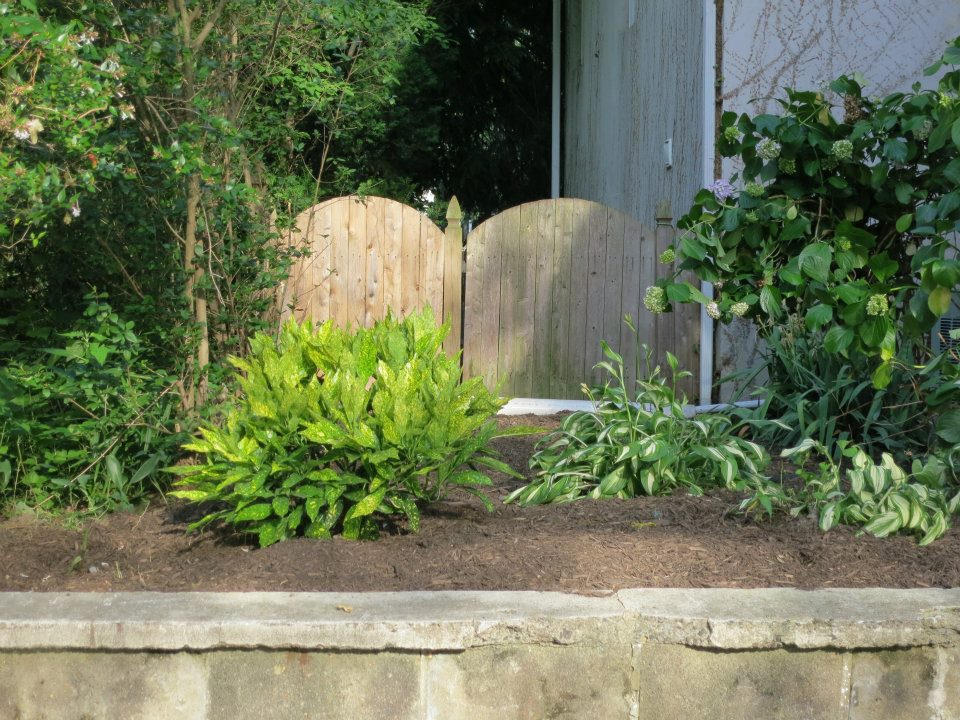 Letting go is a process. As I’ve said in prior posts, I’m not always the best at letting go of things. I try, but it can be a struggle. Across these events, I’ve had to make peace with the fact that it’s not easy for me to let go, and to realize that I can’t do it all at once. It has to happen in bits and pieces. The aforementioned difference in the two corners of the shower tile is bothering me, I cannot deny. I have a preference for one of the two styles, but I would have been ok with either – as long as they matched. But, they don’t. And since we didn’t catch it until after the tiling, grouting, and first round of painting was done, it seems sort of silly to mess with it now, particularly since one of the corners will be bisected by the shower door anyway. However, I’m struggling with letting it go. For now, I’m just trying not to look at it, and that’s the best I can do.

Even somewhat unpleasant tasks can be done with sthira (steadiness) and sukha (ease). I don’t know anyone who loves all the parts of doing home “stuff.” I certainly don’t. Cleaning, sanding, priming, painting – all for ceilings and walls; buying organizational materials and organizing; researching and selecting fixtures – it can all be annoying at times. But, if I try to stay relaxed and just work calmly and steadily, it’s much better. Every time I try to rush through, or i let my annoyance and anxiety bubble up, it all becomes much more unpleasant. This isn’t just psychological. When I do that, I get less mindful, and then problems (dripped paint, dropped brushes, broken outlet covers) start to happen, which cause the task to take longer and be more unpleasant.

They are all good life lessons, in addition to leading to some pretty rooms (and a nice lawn, though I can take no credit at all for that). And that’s how our home repairs and remodels have become part of my yoga in the summer of 2012.

One Response to Home Remodeling as a Metaphor for Life