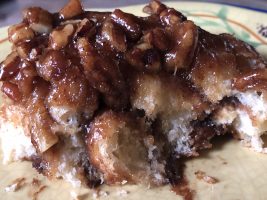 This recipe is a revision of my previous cinnamon roll recipe and I have to say it’s *even better!* There is also the option to make sticky buns, rather than just “plain” cinnamon rolls. I included the icing/drizzle instructions, but you honestly don’t need icing and would not want it for the sticky buns.