Mala Use and a Tiny Devotions Review 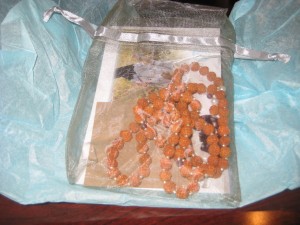 I recently had the distinct pleasure of opening my mailbox to find a beautiful amethyst mala from Tiny Devotions.  In comparison with the other malas that I own, I have to say that this set is truly the most lovely and calm-encouraging mala that I have owned.  The materials of the strand are both beautiful and of high quality, and the beads flow smoothly through the hands.  It also has such a pleasing and stylish appearance that I’m sure I will wear it with great regularity, in addition to using it for my meditation.  The particular mala that I selected has a amethyst medallion.  This was very special to me, because my mother’s favorite stone, and birth stone, was the amethyst, and having this mala on gives me a feeling of closeness to her.  The vibrations of amethyst, productive of calm, peace, and facilitating the search for higher unity, are also well suited to my needs at this time.  The stone is large, but not gaudy in any way.  Because I had a hard time knowing sizing from the pictures online, I have it pictured here on my hand.  My hands are relatively typically sized for a female.  The stone lands right above my naval when it is on (I’m about 5’6″).  In fact, the only downside I could come up with was that I have to hold onto it as I sit down at or rise from my desk at work or it will bonk the side (it only took hearing that once to learn). 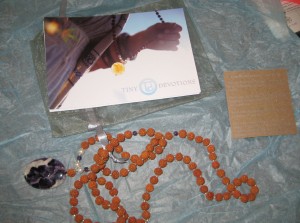 If you are unfamiliar with mala, the other part of this post can be found at Living in the (k)Now after 6/2.  It covers the general history and makeup of malas.  In this post, I focus on the use of mala.

In general, mala beads are utilized in the counting of mantras, chants, or prayers, that can be repeated many times in one period of devotion or meditation.  Using a mala allows the practitioner to think about the meaning of the mantra/chant, rather than attempting to track the number of repetitions while also engaging in the practice. 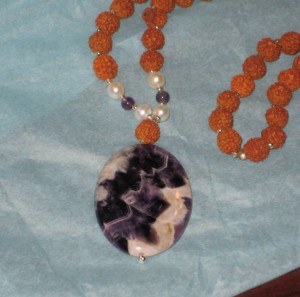 There are different traditions for using mala.  In the Hindu practice, malas are generally held in the right hand.  The strand loops over the middle finger and the thumb moves from one bead to another in a clockwise direction.  The index finger is not used to touch the beads.  When the full cycle is completed, the guru bead is not crossed.  The mala is turned and the cycle moves back in the opposite direction.   In Buddhist practices, the mala may be held in the right or left hand (depending on the tradition) and the beads moved with either the thumb or the index fingers.  Similarly to the Hindu tradition, the guru bead is not crossed.  Should the practitioner wish to continue beyond the number of beads present, the strand is turned and moved in the opposite direction. 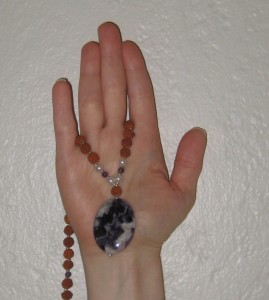 Keeping and storing the mala is another area that differs from one tradition to another.  In some schools of thought, the mala can, or even should, be worn as a necklace or bracelet.  In others, it is to be kept out of sight, brought out only for use.  Some suggest that a new mala should be used for 40 days in a row to attune it to the vibrations of the user.  Practitioners sometimes procure silk or cotton bags to store the mala between use. Others place it on an altar.  Wearing or bringing the mala to other devotional practices (for example Kirtan) is also thought by some to bring a positive energy to the beads.

As you can see, there are many different sets of tradition for the use of a mala.  Once you select your own set of beads, how to utilize and enjoy your mala is another dimension of your practice and should be guided by your own needs and beliefs.

9 Responses to Mala Use and a Tiny Devotions Review