In my interpersonal and family communication classes, I always teach about human systems theory.  I’m a fan of this approach, because it resonates with  me and because it makes sense in the context of communication.  It’s been very interesting, as I’m reading more and more about yoga philosophy, to see how connected the two sets of ideas are.  Really, they say largely the same thing, just with a different set of foci and different terminology.  In this post, I consider the five basic principles of human systems theory and relate them to what I have been reading about the philosophy and theory of yoga.

The basic idea behind human systems theory is that when considering humans, individually or in relationships, all combinations and relationships can be understood using the same overarching theoretical lens, because they are all systems.  Regardless of whether we are talking about one individual, a couple, a family, a classroom, a workplace, etc., each will exhibit the characteristics of a human system, and can be understood in that way.  The five primary features of human systems are:

Wholeness – This is the notion that when parts of a system come together, they take on a “being” that goes beyond any individual and characterizes the whole.  A family is a nice example of this idea in systems theory.  You can think about the individuals in your family, but you can also think about the family as a whole, a thing in and of itself.  It may change with the addition or subtraction of members, but it remains the family.  This concept certainly relates to the idea of the universal being or universal connectedness that is often spoken of in yoga philosophy.  While we may think about each person individually, we are all connected in this overarching oneness that is always there.  It also relates to the connections between the mind, body, and spirit, which may be easily separated in our logic, but are really so interwoven as to be functionally inseparable. 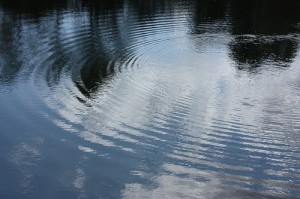 Interdependence –  In systems theory, the idea of interdependence refers to the fact that a change in any part of the system impacts other parts.  These impacts can be big or small, but they are there.  Again, looking at the example of a family, if I have a bad day at work and go home in a grouchy mood, this is going to impact the other members of my family, even though my work life is not theirs.  Oh my gosh! How connected is this to what many writers about yogic thought have to say?  I don’t even know where to begin!  Everything I do is connected to that universal.  Every action I take impacts the world, like a pebble dropped into a pond that ripples far into the distance.  Even within the body, the breath affects the heart affects the muscles affects the tendons affects the joints and so on.  It’s all connected – it’s all related.

Non-summativity – The most basic way this could be defined is that, when it comes to humans, simple addition will not work to understand a system.  We are right now in the middle of a crazy sports season in Philadephia.  Sports teams are a wonderful example of this principle at work.  You can put 9 “ok” baseball players on the field at once and instead of getting just an “ok” team, somehow you get an amazing team.  Or, you can put 9 outstanding players on the field and somehow end up with just an “ok” team.  At the most basic level, you + me ≠ 2.  We are at least = 3 (you, me, and our relationship).  This is so true from the perspective of yoga philosophy as well.  Think about the eight limbs of yoga.  If we add those things together, we get more than the simple sum of them.  We get something that goes far beyond.  As we sit in a yoga class and OM together, the energy that occurs in that space can take us somewhere that is different than simply a group of people who happen to be practicing yoga in the same place.

Equifinality – This concept of systems theory pretty much means that the path of a human system is not predictable.  Two systems can “begin” in the same place, but “end up” somewhere different and the reverse is true as well.  While we are certainly impacted by our history, we are not bound by it.  While we may be able to make some predictions about the future, they are as likely to be wrong as they are to be right.  Imagine two happy newlywed couples getting married today.  If we check in on them a year from now, their situations are likely to be quite different from one another.  Yogic thought tells us to focus on the now.  The past – it is past.  There is naught that we can do about it (and in all likelihood we are recreating it as we remember it anyway).  The future does not yet exist and to attempt to predict it is futile.  Now is where our attention belongs – in this moment, in this time, in this place – mindfulness of what is going on right now.  A review of all of the different paths and practices of yoga also shows us that there are multiple paths one can trod to move toward an ultimate goal of enlightenment/liberation/unification.

Praxis – And last, but not least, comes praxis.  Praxis is the idea that we are both the subject and object of our own actions.  Everything we do comes back to us in some way.  Every choice we make impacts the future choices available to us.  Praxis also encompasses the idea that through our actions we create the situations that then become our reality – so we create the reality that exists for us.  Karma!  This is karma (though I suppose I wouldn’t be so likely to teach it to my university students with that term).  The idea behind karma is that all that we send into the world – good, bad, or in-between – comes back to us in some form.  Dig it?

I could go on, because I’m really grooving on this connection, but I suppose this post has gotten quite long enough.  It’s just very cool to see another example of two completely distinct areas of study of human experience have come to similar conclusions through different paths.  Nice!