Giving Thanks, with Less Harm 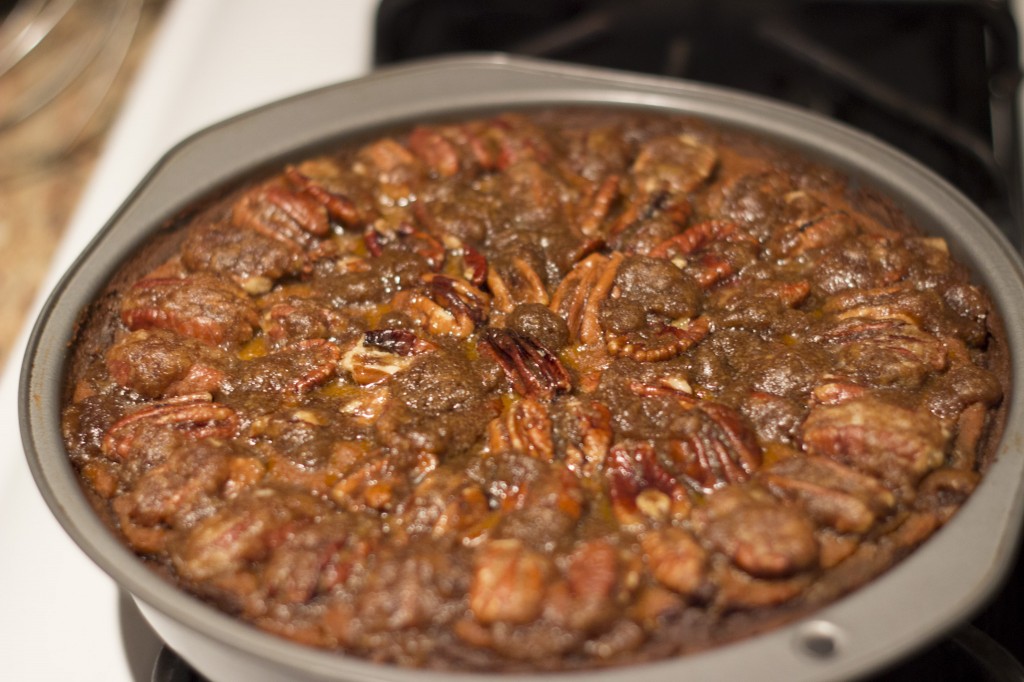 It was my turn to host the Thanksgiving dinner this year, for my family (minus vegetarian DS #2), my brothers-in-law, my mother-in-law, and my aunt-in-law. So, there were 11 of us at the table, in a mix of vegan, near-vegan, and omnivore. While I wasn’t willing to cook an only vegan meal (see my post about multivore families), I wanted to keep the harm level low. So, with the exception of some egg noodles, and two requested meat items, everything else on the table, including appetizers and desserts, was vegan.

I used my standard list of holiday recipes, with a twist here and there. I’ll be repeating at least the tooforkey, dressing, and pie before the holidays are over. I hope these recipes come in useful for your holidays, this year and beyond.

Store bought tofu roasts are rather expensive for their size.  This home recipe takes some time (in fact, I suggest cooking the day before and then heating so it doesn’t tie up your oven, and I actually prefer it on day two and three), but it’s delicious and big!  This recipe was adapted from one by Bryanna Clark Grogan, over a few years of use and switching out items or adjusting amounts. 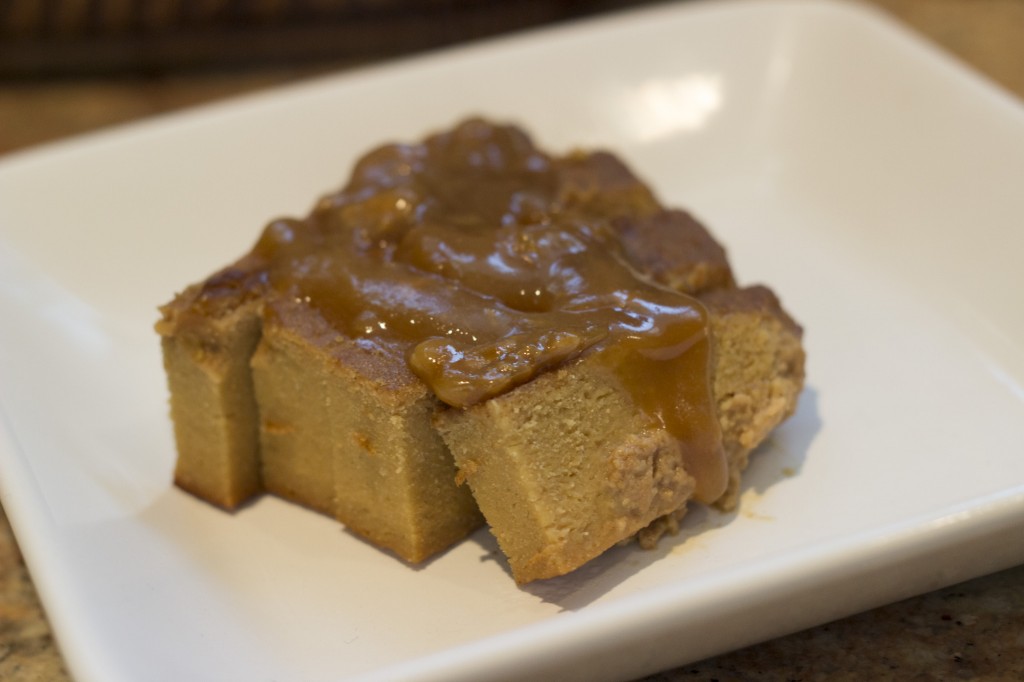 Blend tofu, 1 1/2 cups of water, 2 T soy sauce, liquid smoke, 1 T of the olive oil until smooth.  Once in a while, I will get a block of tofu that has been frozen at some point and it will not mix smoothly.  This is not preferable, but it’s not a tragedy.  Just do what you can. Add the finely chopped onion and 1/2 of the minced garlic.

Line a baking pan with parchment.  Shape the dough into a loaf, try to make it not too “deep” – 2-3 inches tall is preferable.  Mix the remaining water, veg broth powder, soy sauce, olive oil, and liquid smoke.  Pour this broth over the loaf and place in oven at 325*.  Bake for about 3.5 hours, turning it over half way through (I’ve forgotten to turn it and it wasn’t a problem).  Most of the broth will be gone when it’s done (if most of the broth has gone when you turn it, mix up and add another cup of broth).  Remove from oven and allow to “settle” for a while before serving.

As noted above, I recommend cooking this ahead of time.  The next day, place the loaf back into a baking pan, mix your vegan gravy, and pour over it and cover with foil.  Put it back in the oven and heat at 325* until warmed through.

I did not actually make this, this year. I went with a store packet Hain vegan gravy, which we like just fine. But, this is good if you want to do better!

Place 2 T. olive oil in frying pan and saute mushrooms and onions until the onions begin to carmelize.  Set aside.  Mix soy sauce and liquid smoke into broth and set aside.  In a large pan, add remaining oil and begin to heat.  Add flour and stir, forming a roux.  Cook for 1-2 minutes, stirring constantly.  Begin adding broth mixture slowly, stirring constantly to prevent any lumping.  Once fully mixed, add mushrooms and onions.

Growing up in southern Indiana, we always had a bread based dish on Thanksgiving that we called “dressing.”  After I became an adult and was exposed to the horror of Stovetop stuffing, I discovered that some people cooked it inside of the bird (eww) and called it “stuffing.”  Then, I had friends whose families call it “filling.”  So, in my house, we now call it dressing-stuffing-filling.  Those of us who like it REALLY like it, and will eat it for days after, for any meal or snack.  I have now had this for four meals since Thursday.

Place ripped bread in large mixing pan.  Add spices, onions, and celery, and flour and toss gently.  In a separate pan, mix softened butter with soy milk and vinegar.  It should take on the consistency of oily buttermilk (sorry).  Add vegetable broth and stir.

Add liquid to dry ingredients and fold in.  If you like your loaf to be really dense and not have bread pieces still visible, stir more briskly for longer to break up the bread more.  If you prefer the bread bits, fold in gently.

Spoon mix into shallow baking pan, cover with foil, and cook at 350* until warmed through.  If it gets too dry as you cook, add a little more veggie broth.  After thoroughly warm, remove foil and continue cooking until top browns, visible liquid evaporates, and stuffing “sets.”  Time depends on what else you have going in the oven.  I would expect at least 45 minutes covered and another 15-20 uncovered.

Do not try to make a double batch in one pan unless you have time to cook for at least 2 hours. 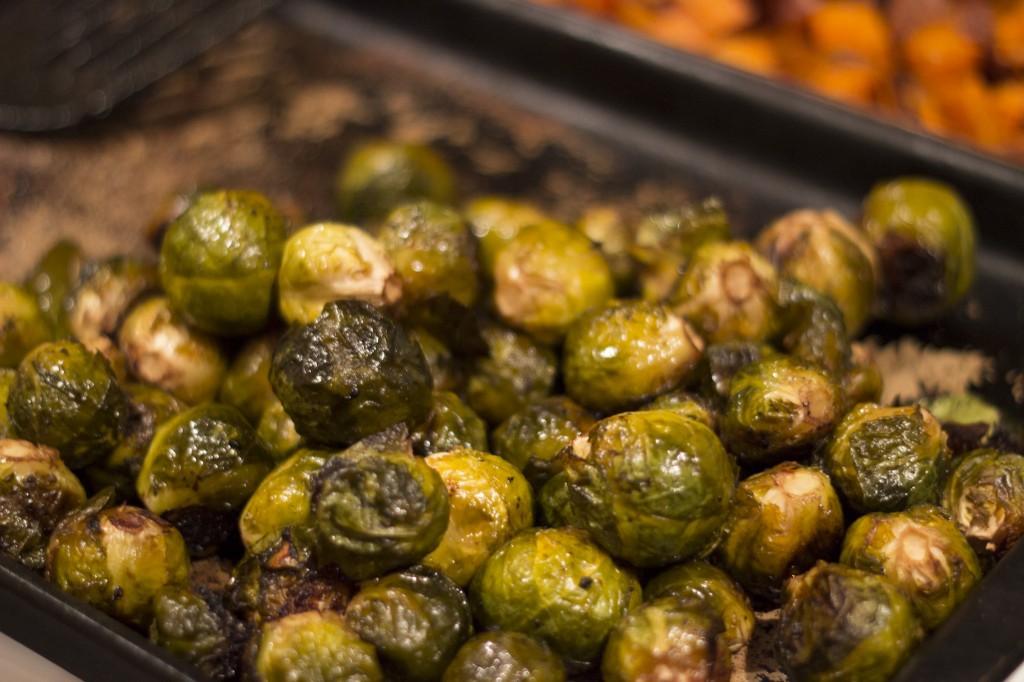 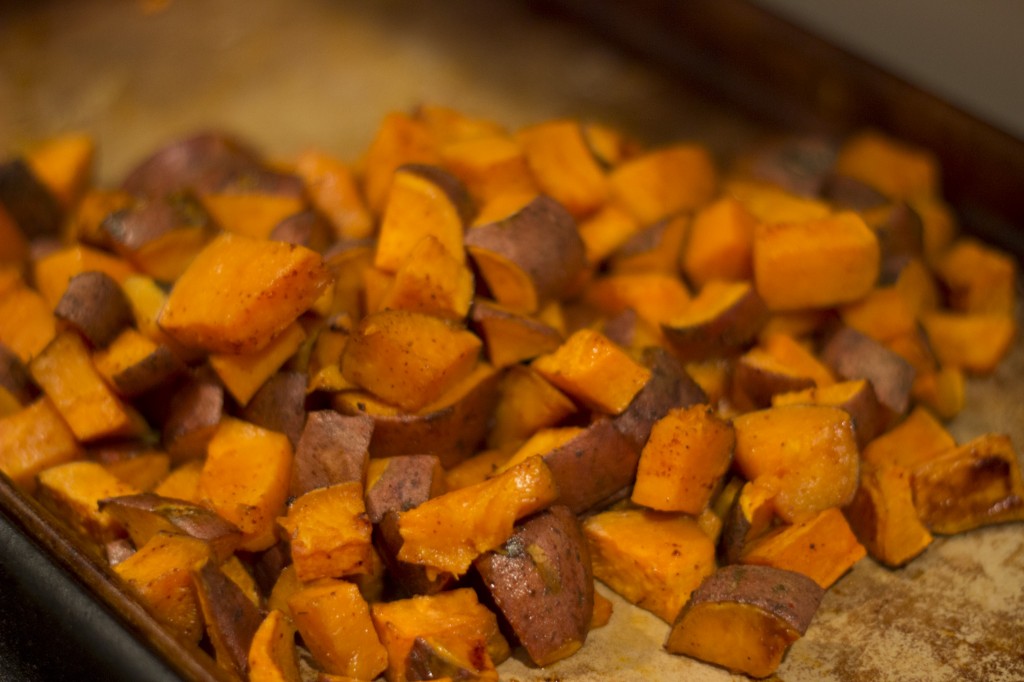 For sprouts, remove sprouts from stalk and remove any loose leaves. Cut off woody end.

Toss whichever veggie you selected in a large bowl with the olive oil and vinegar if desired. I like the vinegar on the sprouts but the chili powder on the potatoes. Add sea salt.

Pour onto a large baking sheets (I like cooking this in a stone pans) and place in oven at 450* and cook for 45 minutes (turn veggies in pan every 10 minutes or so for even roasting).  If needed, add foil over pan and cook an additional 10 minutes or until done.

This is a boring mashed potato recipe with extra fat for special occasions.

Chop potatoes (skins off) and put on to boil. When potatoes are tender, drain.

Add cream cheese and butter and mash. Salt and pepper to taste.

I had store biscuits this year, but include this here for the more ambitious!

Whisk vinegar into soy milk so that it slightly curdles (like buttermilk).  Mix together the dry ingredients.  Cut in the vegan butter until like coarse meal. Make well in center of flour mixture. Add the faux “buttermilk” and stir to create a dough.  Knead for a minute or so on a floured board.  Pat or roll out (aim for between 1/2 and 2/3 inches deep).  Cut with a cutter or a lightly buttered cup top.  Place on an unoiled baking pan and bake at 450* for 10-12 minutes or lightly brown. 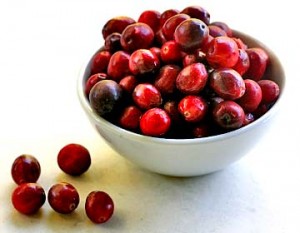 Place cranberries in a food processor and chop until fairly fine.  Add oranges and pulse until shredded and mixed.  Stir in sugar.  Chill and serve!

This recipe started at the Post Punk Kitchen, and was then adapted by Angela at Oh She Glows, and then by me. So so good. 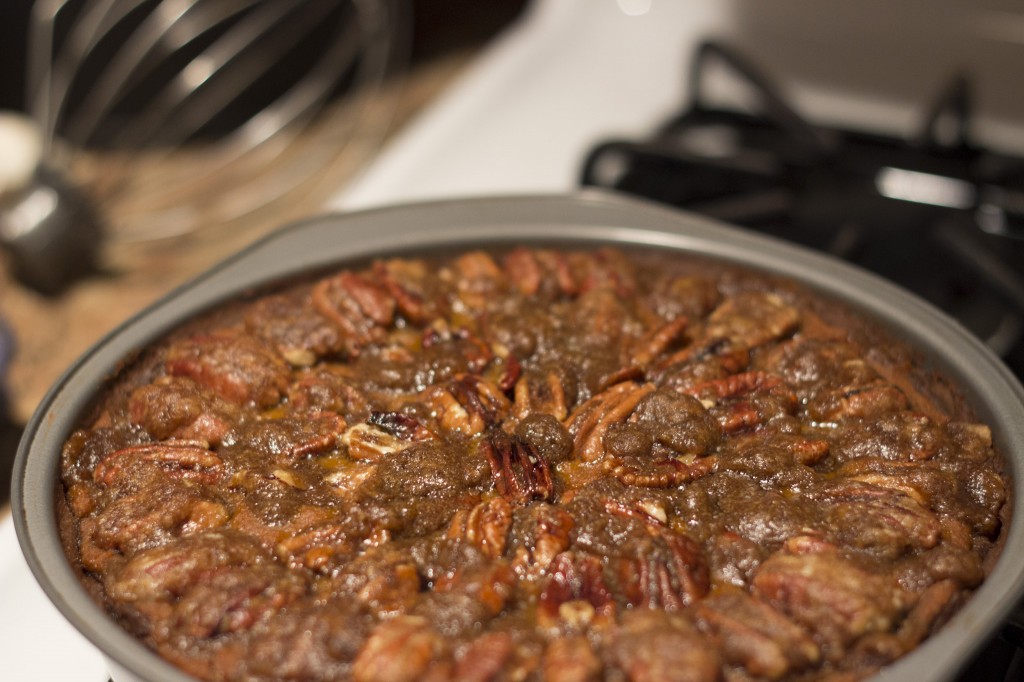 For brownie layer: In a stand mixer or by hand, mix together the coconut oil, pumpkin, vanilla, and sugar until blended well. Sift in the flour, cocoa powder, cornstarch, baking, soda, sea salt and mix until incorporated. Take the entire mixture and place in pie pan. Wet spatula and spread around evenly so it is smooth.

For pumpkin layer: In a large bowl mix together the pumpkin, vanilla, and milk. In a small bowl, mix together the cornstarch, sugar, and spices. Slowly add the dry ingredients to the wet and mix well until all clumps are gone. Now add on top of brownie mixture. Garnish with grated chocolate.

For Pecan topping: Mix all ingredients until well combined and sprinkle on top of the pie.

This recipe started out on The Vegan Spoonful and was very slightly adapted by me. I might have eaten it for three days straight at breakfast last year. This year, I made two. 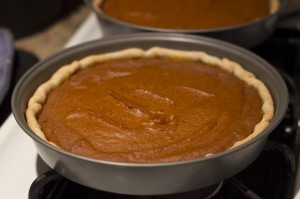 1 unbaked pie crust
2 cups pureed canned pumpkin
1 cup plain soy or coconut milk
3/4 cup sugar
3 Tbsp cornstarch
1.5 tsp cinnamon
1/2 tsp ground ginger
1/2 tsp salt
1/4 tsp ground cloves
1/4 tsp ground nutmeg
Preheat oven to 350 degrees. Combine pumpkin, non-dairy milk, sugar, cornstarch, salt, and spices in a large bowl, and mix very well with an electric mixer, food processor, or blender. Pour into unbaked pastry shell, and bake for about 60 minutes. The pie will still be jiggly when you take it out of the oven, but it will firm up as it cools.

Cool completely on a cooling rack, cover with plastic wrap, and refrigerate for several hours or overnight before serving. Serve chilled and top with vegan whipped topping if desired.

6 Responses to Giving Thanks, with Less Harm