I don’t normally do reviews on this page.  It’s not because I’m opposed to them; I just don’t typically think to do them, and I don’t buy a lot of stuff to review (unless you all want to hear my reviews of kale, peanut butter, and soy cream cheese).  Recently, however, I did a little shopping at Lululemon, Athleta, Prana, and I Am Beyond. So, I thought I would take a minute to pass on some of my thoughts about each.

Lululemon is popular and expensive.  There is just no two ways around that.  I’ve wanted to buy things from them far more than I have actually purchased, due to the cost.  But, recently I bought a pair of capris and was gifted with a tank. 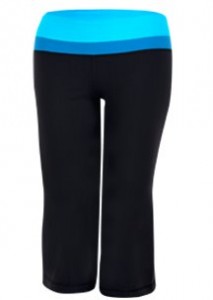 Material – Materials from Lulu seem to vary, but for the most part they are strongly weighted, with a lot of compression effect.  They recommend washing Lulu products completely alone, because washing them with other items can cause the material to appear “pill-y” quickly.  In some ways, I like the feeling of support offered by these clothes, but in other ways, I don’t.  I found the tank very snug on my ribcage, and it was an uncomfortable snug (like a compression sock) that just didn’t work for me and I would have found distracting in a class.

Functionality – Because of the compression factor, Lulu items do provide a good amount of support for even a vigorous class.  And as they tend to be very form fitting, there isn’t anything getting in the way or dragging around.  As a small chested but big ribbed/shouldered woman, I find it really hard to get a fit in a top from them, and many are overly low in the cleavage area.

Looks – Lululemon clothes have that Lululemon look to them.  You know them when you see them.  They are clearly athletic apparel, but with some “fun” details in colors (usually accent colors).  There aren’t many of their items that I would wear for other than athletic purposes, but that’s not necessarily a drawback depending on how your schedule works out.

Cost -Pricey, very pricey.  While I think the quality is pretty good, there is something that troubles me about paying almost as much for a pair of pants as I would for a month of unlimited yoga classes.  I have heard that discounts can be had for instructors (in store only) but haven’t tried that out.

Customer Service / Returns – Watch the return policy for Lulu.  It is a very short window of time, particularly for gift giving or online orders.  My spouse ordered me the tank for my birthday.  By the time it arrived, the day came, and I tried it on, the period when I could return it had already passed.  So, now I’m stuck with a very expensive tank, with the tags still on it, and no way to exchange it or get the funds back.

I Am Beyond was a company I hadn’t heard of at all until after I started spending a lot of time in yoga studios and noticed the little lotus logo on a few people.  As a teacher training completion gift, I bought myself a pair of capri pants, and a jacket from them. 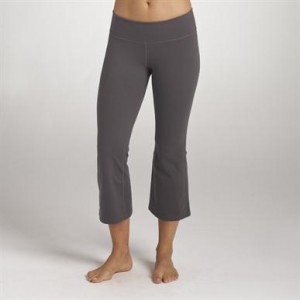 Material – Again, there are different fabrics available in this brand.  Some are relatively thin, which could present a problem dependent on how you are using them.  But, some are thicker.  The supplex/lycra blend that seems to be the most common is possibly one of the softest, most pettable fabrics I have ever experienced. I have to work when wearing the capris not to keep petting my own thigh.  Really.  This fabric isn’t thin, but it’s not as thick or compressive as Lululemon’s similar Luon blend.

Functionality – Because there is less compression, it’s possible that some people may find I Am Beyond products to lack support.  They have a wide variety of styles for most items, but here too I found that a lot of the tanks seemed a little low cut for a vigorous yoga class.  Maybe I’m just a prude.

Looks – I Am Beyond is pretty stylish, and has some unique pieces.  They don’t seem to utilize patterns much, but the solids run a wide range of colors and the styles are different from offerings I see other places.

Cost – IAB is less expensive than Lulu, but more expensive than Prana or Athleta for similar items (i.e a standard pair of capris runs about $90 at Lulu, $70 at IAB, and $60 at Prana and Athleta).  You can also sometimes find promo codes for I Am Beyond, so be sure to check that out before you order.

Customer Service / Returns – I haven’t had to use the return policy for this company, but I noted that it is about the same as Lulu – so a short window. If buying for someone else, I would suggest a gift card rather than an item, because a decision about fit will need to be made rather quickly after arrival.

Prana was the first “real” yoga clothing company I ever got anything from, as a gift.  Recently, I was able to purchase some additional items to give them a better try.  They included capris, tanks, and a dress. 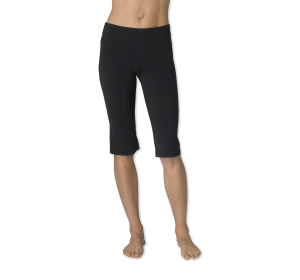 Material – While you’ll also find a variety of materials here, the tops tend to be a relatively “slinky” poly blend, while the bottoms are thicker and more matte.  I like the material of the tops for washability, lack of wrinkle when packing, and flow.  However, if you have issues with slippery feeling fabrics, you’ll want to watch this.  In general, I’ve found the material for Prana to be more supportive than I Am Beyond, but less than Lululemon.

Functionality – Prana has a pretty wide range of items, so it’s not too hard to find things that will work for you.  I’ve found it pretty easy to get tops that don’t leave me in fear of flashing anyone around me.  Because I’m not large chested (or even medium), I find the tanks to have enough support, but I would think that the weight of the material would make this not the case for anyone with average or above breast size.

Looks – If you like prints, Prana might be a good choice for you.  They tend to have a wider variety of prints than the other three.  Once in a while, I see a print there that I feel like is a little middle-aged (but, hey, so am I), but in general, they are pretty.  Their clothes also don’t scream “workout wear” so they are pretty easy to dress up for other purposes or wear transitionally.

Cost –  As noted above, Prana is generally a lower price-point than Lulu or IAB.  This certainly doesn’t make it inexpensive.  If you can catch a sale or know a friend who is an “Influencer” (and then wait for one of their Friends and Family sales) then you can get a good deal on their items.

Customer Service / Returns – Prana has quite a liberal return/exchange policy and they are good about helping with that process.  I’ve been generally pleased with their customer service.

Athleta is part of the Gap company’s offerings.  They have few physical locations, so that has made me hesitant to order.  But, I’ve gone ahead for a few things using birthday gift cards, including pants, a skirt, a tank, and (in the past) swimwear. 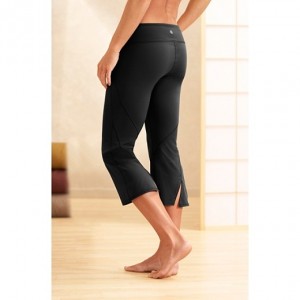 Material – Items at Athleta vary pretty widely in intended use, so there are a lot of different fabrics.  For the yoga specific clothes, most are lycra/nylon blends and of a weight similar to Prana (so thicker than IAB, but not as thick as Lulu).  Other than the more swimwear oriented items, I haven’t seen as much slippery cloth as Prana.  I’ve had mostly good experience with washability of the fabric, with the exception of a little pilling action on a skirt.

Functionality – They have a lot of stuff.  A lot.  It takes some time to go through the pages, because the way things are marked may not really reflect what would be functional to do in them.  For example, some of the yoga tops are such that I’m pretty sure they would fall over your face if you went into any inversion.  It’s worth it to take some time and sort through the site to find what you want.  The tops with support inside seem to be a little more supportive than Prana or IAB, but less so than Lululemon.

Looks – Again here, there is so much to select from that it is hard to say.  They tend to have less print items than Prana, but more than IAB.  A lot of the items have kind of a California/surfer vibe to me.  But, then again, I’m from Indiana, so what do I know?

Cost – Prices at Athleta are similar to Prana, but they have sales with more frequency (though not as often as the other companies in the line).

Customer Service / Returns – Similar to Prana, Athleta has a good return policy.  They are part of the Gap corp., so customer service is about what you would expect there (functional if you call, but they won’t know a lot about the specific items beyond what you can see on the page).  If you have a local store, which are few and far between, returns and exchanges are much easier.

So, there you have it, my little review.  Right now, I would say that Prana is my favorite of the four, but I can see why someone would pick any of the others as well.

6 Responses to A Little Review of Four Popular Yogawear Brands