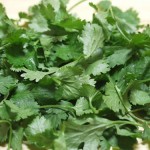 I’ve posted before about how much my family loves refried beans and the method I use to make them.  My youngest (11) calls it “bean paste” and has become pretty good at whipping it up herself from canned beans.  This week has been pretty busy around The VeganAsana house (I say that a lot, don’t I?).  Sunday evening, I taught a yin class, so dinner was a quick affair.  Monday, I had planned to make burritos for dinner (and had soaked the pintos over night), but I got caught at work later than planned and Mr. VeganAsana was on dad duty at a school performance.  This meant another quick dinner.  The sum of all of this was that I started a pot of two pounds of dried pinto beans cooking at 5:45 last night.  With addition of big purple onion, lots of cumin, chili powder, jalapenos, some natural peanut butter, and a very large handful of fresh cilantro, it boiled and simmered until just after 9:00.  (In a side note, The VeganAsana-lings love cilantro. No less than four of them wandered into the kitchen to talk about it.  #2 Son believes that possibly a potpourri made with cilantro would be great around the house)  At that point, I turned it off and… well… forgot about it. 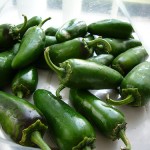 Planning for an upcoming trip to Williamsburg, VA (1/2 the family for 4 days, 1/2 the family for 8 days), a January 2012 visit to Disney, and figuring out how to bank a timeshare week for use in 2012 or 13 for a grownup trip took until after 11:00 and then I remembered the beans.  But, a pot of beans is a very forgiving thing.  There they were, still nice and hot and ready to be blended to within an inch of their lives.  So, blend I did!  The 2 pounds of beans yielded about 10-12 cups of bean paste ready to be cooked up tonight.  That sounds like a crazy amount, I know, but even with me probably not eating and one DS out of the house, the crew will come very close to demolishing them. 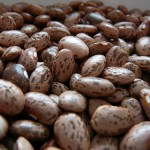 The plan for the beans today is to reheat them in a skillet with a bit of olive oil (I don’t do lard, ew) and coconut milk, to create refried beans.  Then, they will go into warmed flour burrito shells with chopped lettuce, tomato, more cilantro, salsa, cheese and possibly chicken (for the carnis), and some sour cream.   It’s not rocket science, but it’s a good meal, easy to alter for vegans, vegetarians, carnivores, etc. and it’s certainly a crowd pleaser at my house.

Let’s not talk about the atmosphere around The VeganAsana-Casa afterwards, mmkay?

One Response to Beans, Beans, the Magical Fruit